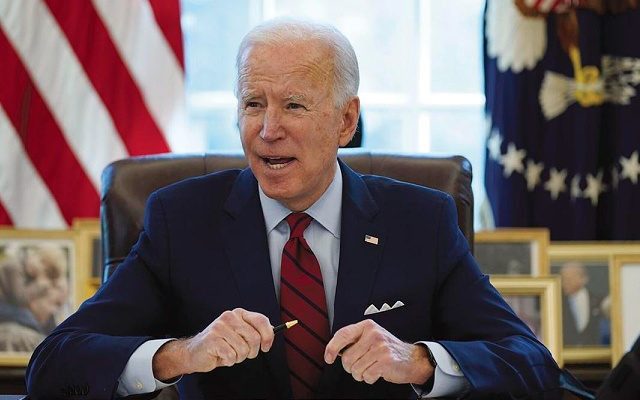 On April 7, 2021, the White House released a fact sheet announcing that President Joe Biden will use  the Department of Justice (DOJ) to publish model red flag “legislation,” address AR-pistols with stabilizer braces, and issue a rule to “stop the proliferation of ‘ghost guns.’”

Breitbart News reported that Biden planned to put forward executive action on gun controls Thursday, and the fact sheet provides an outline detailing what those actions may entail.

According to the White House:

The Justice Department, within 60 days, will publish model “red flag” legislation for states.

The Justice Department, within 60 days, will issue a proposed rule to make clear when a device marketed as a stabilizing brace effectively turns a pistol into a short-barreled rifle subject to the requirements of the National Firearms Act.

The Justice Department, within 30 days, will issue a proposed rule to help stop the proliferation of “ghost guns.”

The White House notes that Biden will also have “five federal agencies [make] changes to 26 different programs to direct vital support to community violence intervention programs as quickly as possible.” The White House made clear the agencies are acting where Congress has not: “These changes mean we can start increasing investments in community violence interventions as we wait on Congress to appropriate additional funds.”

The White House explained that the DOJ will also begin “[issuing] an annual report on firearms trafficking.” One of the goals of the report will be to guide “policymakers” in crafting new regulations (and laws) to institute over time.

The Bureau of Alcohol, Tobacco, Firearms and Explosives (ATF) pushed to recategorize AR-pistols with stabilizer braces in late 2020 then abandoned the effort amid public outcry.

On December 23, 2020, Breitbart News reported that the ATF withdrew their recategorization guidelines, but Biden’s push to have the DOJ refocus on AR-pistols appears to mean the recategorization push is receiving new life.

The purchase of AR-pistols categorized as “short-barreled rifles” could require being fingerprinted and photographed, as well as undergoing a background check, registering the firearm with the ATF, paying the federal government a $200 tax (on top of the price of the firearm), and waiting nine to ten months for the whole purchasing process to be completed. That is the standard process for other firearms and accessories under the purview of the National Firearms Act.

Related Items
USA First Reporting
← Previous Story Biden Says Americans Who Get Vaccinated Can Celebrate the 4th of July, ‘You’re Able to Get in the Backyard with a Group of People Because You’ve Been Vaccinated’ (VIDEO)
Next Story → Biden’s Commerce Secretary Claims No ‘Shred Of Evidence’ That Trump Tax Cuts ‘Increased Growth Or Productivity’
Subscribe
3 Comments
Oldest
Newest Most Voted
Inline Feedbacks
View all comments
Michelle

Wow, remember the days when new laws had to be voted on?? It was less than 6 months ago, Trump couldn’t issue a statement without approval from Congress. This Nightmare Fake President just issues EO for EVERYTHING ! , and the swamp is all in. Illegal immigrants pouring in, defending the police, now take away our 2nd amendment! What could possibly go wrong!! Sounds like they got a hold of Hilters hand book!

So joes sending out the Brownshirts.
Just bypassing our elected Congress members. And the Law. Next you will be thrown into jail for not wearing a mask. We should be investigating the chines flu pandemic and how this terrorist attack on the whole globe happened.

This is completely unconditional and should not be passed by the house or senate Period! Shall not be infringed upon, Come and take it and Will not comply should be in everyone’s dialogue right now! We lose our gun rights ANY of them we lose it’s really that simple! People get ready to fight the tyrants in our government because that’s what it’s coming to!