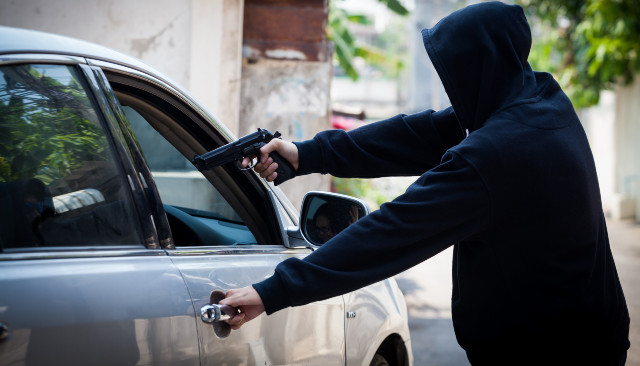 Crime has left the inner city and is at our doorsteps. Even in the suburbs, it’s hard to feel safe, especially in a Democrat stronghold like Philadelphia, where criminals are regularly released back onto the streets to wreak havoc. It’s no longer under cover of darkness either. Crooks are getting more brazen, and more reckless. Check out what happened to a Philadelphia mother and her daughter.

An investigation has been opened regarding the carjacking of a Philadelphia mother and her teenage daughter at their home last week.

The two were leaving the house on Maxwell Place at approximately 6:00 a.m. September 19 when an armed suspect approached.

Folks, that’s 6 AM in the morning. Does crime never sleep? Do criminals not need rest? It’s disturbing that in Philadelphia you aren’t even safe at your own home in the wee hours of the morning.

It appears as though this crook knew when these folks would be leaving the house. This likely wasn’t a random act of criminality.

“It appears he was laying in wait,” Captain John Ryan told the outlet, adding the man rode a bicycle there and left it behind.

Video footage showed the suspect point what appeared to be a gun at one of the victims. Moments later, the woman held her hand out as if to keep the suspect from coming closer then told him, “Take whatever you want,” as he jumped into the driver’s seat.

So, we have a robber that rode his bicycle to a carjacking. You can’t make this stuff up. The woman and her daughter didn’t resist, which is the smart move in this case since they had a gun pointed at them.

Thankfully no one was hurt, and police are actively trying to solve the case, though one has to wonder if the criminal would even be detained, or just given bail and turned loose.

That’s the problem in lib cities. The soft on crime stance has led to a steady increase in crime.

“Philadelphia has suffered a comparable increase in violent crime under the direction of Mayor James Kenney (D), climbing an even 7 percent in 2022 compared to the first half of 2021,” the Breitbart News report said.

This is only September folks. If these cities are already set to break last year’s numbers with three months left, how bad will 2023 be? Sadly, little is being done to turn the tide. Liberal District Attorneys are setting too-low bail numbers, and repeat offenders are routinely set free to offend again.

Last week, Breitbart News highlighted a Philadelphia Inquirer report showing approximately eight people on average were shot on a daily basis in the city between Memorial Day this year and Labor Day.

This is a city by the way, where the mayor JUST signed an executive order declaring “gun free zones”, and threatening prosecution if any legal gun owners are caught carrying. Such a great idea to disarm legal folks, while criminals run rampant.

There’s no denying, we were safer under President Trump than we are now, and these liberal cities will continue to rot until leadership changes. Until then, stay safe!