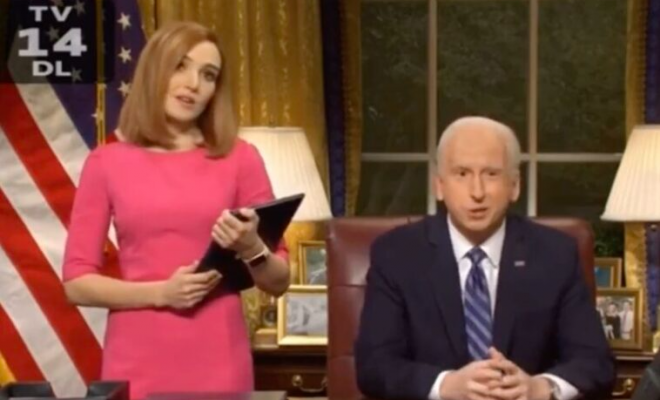 In a brand new ‘Saturday Night Live’ skit, the far-left wing “comedy” show finally took a jab at their beloved Joe Biden in the midst of his disastrous Presidency.

The skit depicts Jen Psaki and Joe Biden sitting in the Oval Office as Joe asks her to give him a rundown of things going on around him.

“I tell ya, you’re dynamite in those press briefings with your quips, your one-liners, what do you call those little zingers?”, asks the actor who portrayed Biden.

“Uh, facts. Though I believe the internet calls them Psaki bombs,” says the actress, falsely asserting that Psaki actually tells the truth during her briefings.

“Oh yeah! I love that. Lay some of those facts on me,” says the Biden character.

“Okay, um, your CNN Town Hall was watched by no one, and your approval rating is in the dumpster,” says the Psaki character.

Watch the skit below:

“I’m uh, bad at lying so I’m going to leave!,” says ‘Psaki’, implying that Biden’s presidency is going to continue to be a disaster.

“I don’t understand, people used to like me. The press would call me Uncle Joe! I miss the old me,” concludes the actor who played Biden.