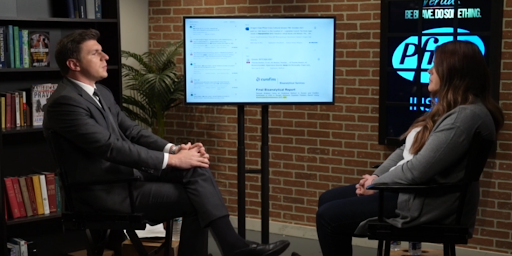 The ingredients in the Covid experimental mRNA gene therapy drugs have remained elusive at best.

We recently reported how American scientists discovered graphene oxide and parasites in the Covid shots.

Thanks to Project Veritas and a brave whistleblower from Pfizer, it appears aborted fetal cell lines also come with every Covid jab.

The whistleblower from Pfizer is Quality Auditor Melissa Strickler from the McPherson, Kansas plant, which produces some of the most units for Pfizer.

Strickler says she reached out to Project Veritas because she had nowhere else to turn while her company lied.

She says she was traumatized and sickened by what she saw at Pfizer and has taken a leave of absence.

With the news buried from the public about aborted fetal cell lines, Strickler did this to alert the public because, as she says, “it needs to be seen by the people because they are trying to get this to kids.”

If that wasn’t bad enough, leaked emails from the Vice President of Pfizer and the Senior Director of Worldwide Research conclude that they did everything they could to keep this information hidden.

The leaked email includes the following:

We believe that the risk of communicating this right now outweighs any potential benefit we could see, particularly with general members of the public who may take this information and use it in ways we may not want out there.

It looks like Pfizer hid the use of aborted fetal cell lines so religious Americans couldn’t claim a proper religious exemption.

Religious exemptions not only hurt Pfizer’s wallet, but they pave the way for noncompliance with the Biden agenda.

According to Pfizer whistleblower Strickler, her company is denying religious exemptions even considering these facts!

Check out the entire clip from Project Veritas on Rumble below:

The mainstream media is also to blame for covering up the facts behind the mRNA ‘vaccine’ ingredients.

Instead of doing good investigative journalism, they go and ‘fact-check’ unfounded claims as accurate.

The leaked emails show that HEK-293 cells in the Pfizer Covid shot come from an aborted fetus.

Aborted fetal cell lines taken from elective abortions have been used since the 1960s to create vaccines.

But what happens when drug manufacturers and the media are silent about unethical ingredients?

Will the drug companies be held liable for violating the Constitution?

Science discussed back in 2020 that at least five Covid jabs developed use human fetal cell lines.

The ingredient HEK-293 is a kidney cell line from an elective abortion in 1972.

PER.C6 is a proprietary cell line owned by Johnson & Johnson and made from an 18-week old baby’s retinal cells in 1985.

Science has more on the aborted fetal cell lines used in the experimental mRNA Covid shots:

Cells derived from elective abortions have been used since the 1960s to manufacture vaccines, including current vaccines against rubella, chickenpox, hepatitis A, and shingles. They have also been used to make approved drugs against diseases including hemophilia, rheumatoid arthritis, and cystic fibrosis. Now, research groups around the world are working to develop more than 130 candidate vaccines against COVID-19, according to the World Health Organization; 10 had entered human trials as of 2 June.

At least five of the candidate COVID-19 vaccines use one of two human fetal cell lines: HEK-293, a kidney cell line widely used in research and industry that comes from a fetus aborted in about 1972; and PER.C6, a proprietary cell line owned by Janssen, a subsidiary of Johnson & Johnson, developed from retinal cells from an 18-week-old fetus aborted in 1985. Both cell lines were developed in the lab of molecular biologist Alex van der Eb at Leiden University. Two of the five vaccines have entered human trials (see table, below).

In four of the vaccines, the human fetal cells are used as miniature “factories” to generate vast quantities of adenoviruses, disabled so that they cannot replicate, that are used as vehicles to ferry genes from the novel coronavirus that causes COVID-19. When the adenoviruses are given as a vaccine, recipients’ cells begin to produce proteins from the coronavirus, hopefully triggering a protective immune response.

The fifth vaccine, which has shown promise in monkeys and is headed for human trials as soon as this summer, is what is known as a protein subunit vaccine. Researchers at the University of Pittsburgh use HEK-293 cells to manufacture the coronavirus’ spike protein—a vital part of its structure—which is used to trigger an immune response. The vaccine is delivered through a skin patch with 400 tiny needles.

The fetal cell lines are key to producing both types of vaccine. “HEK-293 [cells] are essential for making protein subunit vaccines,” says Andrea Gambotto, a vaccine scientist at the University of Pittsburgh School of Medicine and the vaccine’s lead developer. Their human origin is important, he says: “Cultured [nonhuman] animal cells can produce the same proteins, but they would be decorated with different sugar molecules, which—in the case of vaccines—runs the risk of failing to evoke a robust and specific immune response.” (Among the developers of the five vaccines, only Gambotto responded to a request for comment.)

David Prentice, vice president and research director at the Charlotte Lozier Institute, which opposes abortion, notes researchers making adenovirus vaccines have modified HEK-293 cells to be adept at packaging new genes—such as those that direct cells to assemble the coronavirus spike protein—into adenoviruses. But he adds that other technologies are available, including using cells captured from amniocentesis that are engineered to make replication-deficient adenoviruses.

“The use of cells from electively aborted fetuses for vaccine production makes these five COVID-19 vaccine programs unethical, because they exploit the innocent human beings who were aborted,” Prentice and a co-author—molecular biologist James Sherley, a Lozier Institute associate scholar and director of the adult stem cell company Asymmetrex—wrote in a position paper published last month.

But Arthur Caplan, a bioethicist at the New York University School of Medicine, counters: “There are better ways to win the abortion wars than telling people not to use a vaccine. These are long-over abortions. These cells are decades old, and even major religious leaders like the pope have acknowledged that for the greater good it’s not worth the symbolism to put the community at risk.”

The Vatican’s Pontifical Academy for Life declared in 2005 and reaffirmed in 2017 that in the absence of alternatives, Catholics could, in good conscience, receive vaccines made using historical human fetal cell lines.

A vaccine made by the Chinese company CanSino Biologics was the first COVID-19 vaccine to enter phase II human trials. It was developed using adapted HEK-293 cells that the company licensed from Canada’s NRC, where the cells were developed. (NRC-developed HEK-293 cells have already been used to develop an approved Ebola vaccine.) Last month, NRC announced a collaboration with CanSino Biologics under which it is preparing to run late-stage clinical trials of the vaccine in Canada, and scale up facilities to produce the vaccine in quantity.

The two U.S.-backed vaccines that have drawn criticism from antiabortion groups are on a short list of candidates targeted to get financial and logistical support from the U.S. government under the White House’s Operation Warp Speed, which aims to accelerate the development and approval of at least one COVID-19 vaccine by January 2021, according to a 3 June report in The New York Times.

One of the Warp Speed candidates, made by Janssen Research & Development, uses PER.C6 cells. The second, from University of Oxford researchers and AstraZeneca, uses HEK-293 cells. Both have received U.S. government commitments of, respectively, $456 million and $1.2 billion, if they meet milestones, through the Biomedical Advanced Research Development Authority (BARDA).

Another vaccine that relies on HEK-293, being developed by two companies owned by the billionaire scientist and businessman Patrick Soon-Shiong, made an earlier, Warp Speed long list of 14 promising candidates, according to a press release from one of companies, NantKwest.

Prentice says: “As they are choosing—BARDA and the Warp Speed people— what vaccines to move ahead, they should at least recognize that there is some portion of the population who would like an alternative vaccine they can take in good conscience.”

Caplan disagrees. “If you are going to say the government shouldn’t fund things that a minority of people object to, you will have a very long list of things that won’t get funded by the government, from research on weapons of war to contraceptive research.”

The Trump administration has restricted the use of human fetal tissue from elective abortions in biomedical research. One year ago, it adopted a policy that forbids researchers at the National Institutes of Health (NIH) from using fetal tissue from elective abortions in their studies. And it imposed an extra layer of review on non-NIH scientists seeking agency funding to do research using such tissue. But the policy did not stop either group from using decades-old fetal cell lines like HEK-293 and PER.C6

Even though President Trump restricted the use of human fetal tissue from abortion in biomedical research, scientists found a way around it by using decades-old fetal cell lines.

With this confirmation from Project Veritas and Pfizer whistleblower Melissa Strickler, Biden should condemn any denial of religious exemptions.

By keeping the use of aborted fetal cell lines a secret, religious exemptions get denied while unethical mandates pile up.

Hopefully, with more light shed on the truth about the Covid jabs, the rest of America wakes up to the horrors of the coercive and deceptive nature of the Biden regime and pharmaceutical industry.

Related Items
USA First Reporting
← Previous Story Oh No! Biden Goes Off Teleprompter: “Last night I was on the television, on television, I was on…the….telephone”
Next Story → Virginia County Asks Governor to Waive Absentee Ballot Witness Signature Requirements Ahead of Governor’s Election