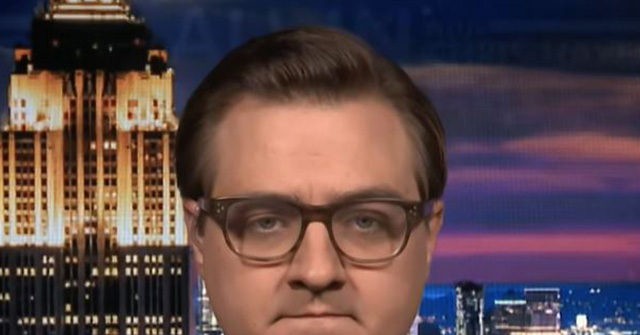 MSNBC anchor Chris Hayes said Tuesday on his show “All In” that Republicans like Donald Trump Jr., Reps. Lauren Boebert (R-CO) and Marjorie Taylor Greene (R-GA), who have posed with guns behind them, were akin to the terrorist Osama bin Laden.

Hayes said, “It’s been unclear for some time exactly what Donald Trump does, but like his father, he does love to make content. This weekend he posted a video of himself ranting about teachers’ unions while posing with a wall full of guns. The whole thing had a here are my thoughts from my bunker vibe.”

He continued, “As weird as this image is, it’s kind of becoming a trend on the right. Republican Congresswoman Lauren Boebert, owner of Shooter’s Grill in Rifle, Colorado, where guns are welcome and seemingly encouraged on the premises, has built her political identity around guns. Boebert vowed to carry a Glock around D.C. and on Capitol Hill and released a video to make sure we all knew it. Last Thursday, she came into zoomed into a virtual congressional hearing with just a mess of guns piled on the bookshelf behind her. AR-style rifles, a handgun just laying across a bunch of books. Boebert, who is raising four young boys, later tweeted that the guns are not in storage but are quote ‘ready for use.’ Apparently, she  just leaves them out because she fears she may need to fire multiple rounds of ammo at someone who comes into her den.”

Show pictures of terrorists, Hayes continued, “Lots of people immediately noted that the use of guns that way as props and the implicit threat that comes with them has a long and not necessarily great history for those around the globe. Osama bin Laden for one, liked to pose in front of his bookcase with a gun prominently displayed. The Irish Republican Army would display guns in its propaganda posters and murals. Cuba revolutionaries posed with guns all the time, too. No single side of the spectrum has a monopoly on this aesthetic. You can see it all over the world. It is unquestionably the aesthetic of armed struggle, of revolution or insurrection.”

He added, “A movement or faction who puts images of guns, the celebration of guns front and center in its political aesthetic is a movement that is engaging in something that we would not call the normal rhetoric of elected democratic politics. You can’t escape the meaning of it. It communicates that they’re committed to or at the very least open to the possibility of violent overthrow of the government or the existing order. Now in the Republican Party, it seems like it’s becoming common and unremarkable. You’ll remember Marjorie Taylor Greene posed with this gun in her campaign ads next to governmental members of Congress.”