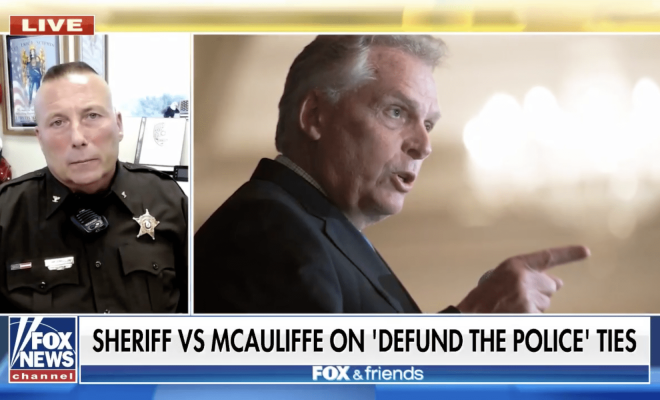 Last night, things got heated when a brave Virginia sheriff confronted VA governor candidate Democrat Terry McAuliffe over his ties to a radical anti-police group. It appeared to hit a nerve when Montgomery County Sheriff Hank Partin stood up and asked the Clinton fan-boy Terry McCauliffe about the group’s endorsement.

On July 20, you accepted an endorsement from the New Virginia Majority. They are a large defund the police organization who wants to abolish prisons and ICE. You said you were proud of their endorsement.

McAuliffe responded by yelling at the sheriff, pointing out that he just spent the last 25 minutes talking about what he does for the police. “Now, first of all, Sheriff,” a heated McCauliffe responded, adding,  I’m proud to accept any endorsements.”

“So you’ll never support defunding them?” Sheriff Partin asked? The Democrat candidate for VA governor refused to answer the question and instead, responded by saying he wouldn’t “dignify” the sheriff’s question with an answer.

He told “Fox & Friends” host Brian Kilmeade, that after a tough few years, he wants to vote for someone who will support law enforcement.

“I was attempting to nail him down on a yes or no,” Partin said. “And I asked him, ‘Can you give us a yes or no?’ And that’s when things went south.”