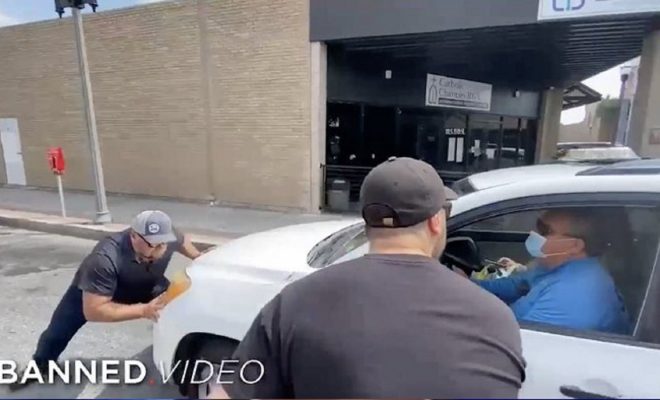 Alex Jones has once again done what few others would be brave enough to do.

While documenting border crisis, Jones and his crew witnessed a man shoving several very young children into the luggage compartment in the back of his vehicle.

According to Infowars, children were being taken “from the dirt floor child camp under the International Bridge in McAllen” to a processing camp in Donna, TX. The migrants were then moved to a COVID processing center in downtown McAllen, before being brought to Catholic Charities of the Rio Grande Valley.

The charity, according to the Infowars report, provides the illegal migrants with airplane or bus tickets to any city they choose in the US and a debit card with $1,200 per person.  They are then transported by staff to the airport or bus station. On their website, they claim to “have assisted” over 23,000 individuals who have illegally traveled into this country.

“When the crew was walking to the Christian Charity center near the bus station, they witnessed five children and an adult exiting the center and being loaded in a hatch back car,” Infowars reports. “Three of these children were loaded into the luggage compartment where no seat belts were present. This video picks up where the crew sprung into action.”

Jones immediately stood in front of the vehicle to prevent it from moving, while members of his crew attempted to get police to the scene.

After police arrived, the driver removed the children from the back of the vehicle and brought them back inside the building. He claimed that their mother was with them.

We need more questions about these ? Charity: like info wars said you don’t stuff children in the luggage compartment and in America all children at a certain height requirements need car seats: mom or no mom. The children trafficking has to stop.

I haven’t heard of Alex Jones in years. But I’d like to thank him for stepping up in this situation. Makes my heart swell seeing people standing up to this tyrannical administration. Now could someone tell Abbot to close our borders since they’re in our state why doesn’t he close them!

Thank goodness people reacted to this we need more preventive measures happening like this…
Protect the innocent, expose the corrupt