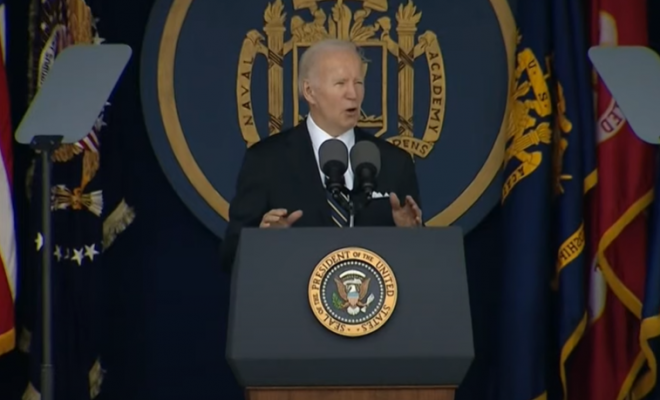 Biden is speaking at another graduation commencement and this time for Naval officers.

During one part of his speech, Biden creepily whispered “I’m your Commander in Chief”.

In response, the graduating Naval officers responded in laughing.

CBS had more on Biden’s speech:

Biden wished “fair winds and following seas” to the U.S. Naval Academy’s class of 2022 Friday in Annapolis, setting the stage for the world the more than 1,200 midshipmen are entering as they graduate.

“Well, midshipmen — you made it! You made it!” the president began.

Mr. Biden has delivered the Naval Academy graduation speech on two other occasions, in 2010 and 2015, when he was vice president, but Friday marked the first time he gave the address as president. More than 20,000 people attended at the ceremony, including graduates, families, Naval leaders and members of Congress. The president joked about pranks the graduating class has pulled during their time at the academy, and kept the tradition of excusing minor infractions.

“Anyone wants to fess up to getting the printer out of the chapel dome, now’s your moment. No one’s gonna’ admit it now, huh? OK. Because as your commander-in-chief, in keeping with longstanding tradition, I hereby absolve all those serving restrictions for minor infractions. You are absolved!” the president said, to cheers.

Taking a more serious tone, the president said the graduates are entering a world where Russian President Vladimir Putin is trying to “wipe out the culture and identity” of the Ukrainian people, by attacking schools, hospitals and museums “with no other purpose than to eliminate a culture.”

Biden revived his frequently ridiculed stage whisper Friday while addressing the US Naval Academy’s Class of 2022, stooping over his microphone to remind them that “I’m your commander-in-chief.”

Biden addressed the graduates for approximately 25 minutes during the outdoor ceremony at Navy-Marine Corps Memorial Stadium in Annapolis, during which he slammed Russian President Vladimir Putin over his three-month-old invasion of Ukraine.

“The actions taken by Putin were an attempt to — to use my phrase — to Finlandize all of Europe, make it all neutral,” Biden said. “Instead, he NATO-ized all of Europe.”

The phrase “Finlandize,” which the president mispronounced as “Fingalize,” refers to Finland’s Cold War-era practice of treading lightly in international politics so as not to upset its near neighbors in Moscow.

The president was speaking about Finland and Sweden applying to join NATO in response to the Russian invasion, which began Feb. 24 and has been met with stiff resistance from Ukraine’s military.