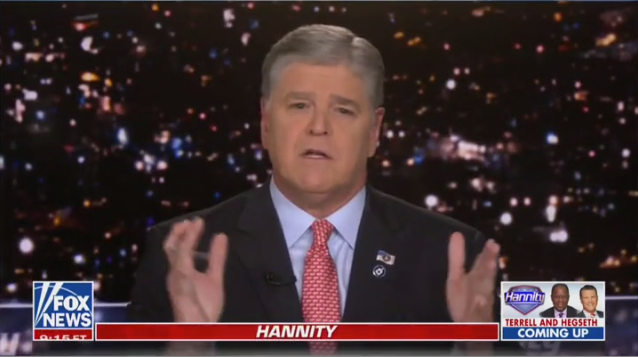 Fox News host Sean Hannity chafed at New York City Mayor Bill de Blasio’s mandate that bars, restaurants, gyms, and other businesses in the city to require proof of a COVID-19 vaccine to allow customers inside, calling it a racist proposition given the low percentage of blacks who have gotten a shot.

Earlier Tuesday, de Blasio, a Democrat, announced that the new mandate would take effect August 16 as the Delta variant of COVID-19 begins to infect a growing number of Americans, most of whom are unvaccinated, according to federal officials and various media reports.

But Hannity, who lives in the city, railed at de Blasio’s requirement, noting that not only is it racist but it runs counter to his party’s insistence that requiring voters to produce an ID is bigoted too.

“Anyone that wants to dine indoors, or go to the gym or do pretty much anything inside, you will need to present documents proving that you have been vaccinated,” Hannity said during his program Tuesday evening.

“But apparently identification for daily activities is Democratic approved,” he added.

“Just like attending the DNC, want to see your congressman or women or senator from your state, or getting a bottle of wine or a six-pack of beer, ‘yeah you need photo ID,’ and now they want you to have identification to prove you’ve been vaccinated just to enter a restaurant, but not to vote,” the host continued.

Hannity, long one of the cable news giant’s top-rated hosts, then noted that according to current statistics, only about 33% of blacks in New York City have gotten a COVID-19 vaccine, meaning they will be more severely impacted by de Blasio’s mandate.

“That would mean 66 percent, fully two thirds of African Americans will be barred from restaurants, from concerts, from venues where you have ballgames, movie theaters all in New York City,” Hannity said.

“This will now negatively and quite disproportionately impact minorities in New York City.”

Another group that is going to be negatively impacted are New Yorkers and visitors who cannot get the COVID vaccine for medical reasons.

He went on to cite recently released research from the Cleveland Clinic indicating that people who have already been sickened by the virus and have recovered are as immune as they would be if they were vaccinated and thus don’t require a jab.

He also railed at the fact that customers would have to reveal personal medical information.

“Anyone who’s vaccinated and is allowed to attend indoor activities will soon have to share their personal, medical documents with employees at every restaurant, every bar, every sporting event, every concert and other random strangers all across New York City,” said the host.