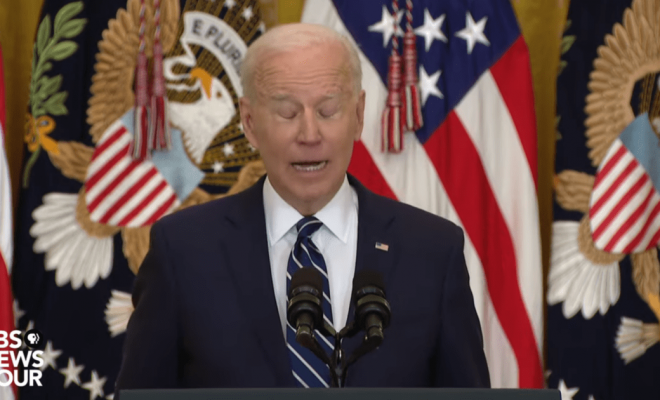 Video Emerges of Biden Telling His Future DHS Chief He Wants to Make “Caucasians Like Me” The Minority with an “Unrelenting Stream Of Immigration…Non-Stop, Non-Stop” [Video]

In February of 2015, Joe Biden opened his mouth and spilled the beans, telling exactly what the Democrats had planned for Americans. Sitting right next to him is his future DHS Chief, who is now doing everything he can to facilitate Biden’s plan.

Please listen to what Biden said in 2015 and what Sue Payne revealed about the left’s plan for a “New America.”

This plan puts Americans last and the third worlders they’ve been importing first. It’s a plan to redistribute wealth by importing poor migrants via immigration or refugee resettlement. The globalist agenda…

These initial “new Americans” are to be used as “seedlings” in the construction of a “country within a country.

Yes, Joe Biden wants an “unrelenting stream of immigration” that will make “Caucasians like me” the minority. And that’s a “good thing” (February 2015)

TASK FORCE ON NEW AMERICANS FOR A NEW AMERICA: How Obama’s administration weaponized illegal aliens and refugees, and Biden is continuing the plan:

Journalist and radio host Sue Payne reveals to Mark Levin what we’ve been saying about what’s happening to small towns all across America. Ms. Payne was lucky enough to be privy to a  plan for building a ‘country within a country’ using illegals and refugees. This is terrible for America and is a serious blow to our economy, jobs, and way of life. Please listen to Sue Payne and read the bullet points below. Google “Welcoming America” and check to see if they’re in your town, then you’ll know if your town is a target. Yes, this is the fundamental transformation Obama was talking about.

Sue Payne was privy to listening in on multiple conference calls between Barack Obama and 16 members of his cabinet. What she uncovered was shocking and disturbing.

The administration’s weaponization of illegal aliens and refugees may be far more sinister than even the most ardent opponents have yet imagined.

On one of these calls, Obama conducted a meeting with his new ‘Task Force On New Americans,’ chaired by radical Cecilia Munoz, former vice president of the radical, Hispanic race-supremacy group La Raza (‘The Race’).

“Remember when he (Obama) went to Las Vegas? The media said he was signing an executive order for five million illegal aliens to become deferred. In reality, what he did was sign a memorandum that created the ‘Task Force On New Americans,’ which would implement his ‘amnesty mill’ for the five million illegals – which I believe is going to be more than that… On these conference calls, it became clear that he’s looking at 13 to 15 million to give protection and move them on to citizenship.” – Payne.

These initial “new Americans” are to be used as “seedlings” in the construction of a “country within a country,” which would help complete a full ‘fundamental transformation’ of the United States.

Specific cities are being designated as “receiving communities” (sanctuary cities – we now have 300!) to which illegals are being bused and flown at the expense of American taxpayers. These communities are being used as incubators for an entirely new population that assist in bringing ‘people in the shadows into the light – to essentially conquer proper citizens and push them into the underclasses over time.

Cabinet members discussed the importance of designating upon these illegals ‘refugee status,’ and to then make them aware of their ‘rights’ as they pertain to massive income tax credits (to the tune of $35,000 in some cases), free medical care, free in-state tuition, 0% personal loans, credit cards, and other forms of ‘free cash’ – all at taxpayer expense.

Additionally, there was an emphasis placed on the importance of waves of older illegal immigrants “aging successfully” by being immediately slip-streamed into the Social Security program that the Congressional Budget Office has already warned will be completely exhausted by 2030. This is, of course, despite the fact that they would be illegally and undeservedly sucking dry the mandatory lifetime contributions of American workers.

It was also made clear that this ‘protected class’ of illegal aliens from South and Central America, Mexico, Haiti, Syria, Africa, and the Middle East would not be interested in – nor expected to be – integrating, but to instead “navigate” their way through our society and culture until theirs’ dominate. Read more: AFP

On November 21, 2014, the Task Force on New Americans was formed. Task Force began meeting until Jan – Feb 2015, when a series of three (3) listening sessions was conducted to gather information to prepare a report due to the president by March 2015.

During the three listening sessions, it was disclosed that representatives of the White House and all cabinet members and immigrant groups would share information to be included in the report.

Some of the information exchanged was:

Others commented that these same communities would be viewed as “emergent immigrant communities.”

As a listener on the call, it was easy to logically see how these communities would welcome immigrants out of the shadows. Still, also, it could be construed that the host community members might well be relegated into the shadows. In essence, the seedlings consume the host, and what was once the original community is transformed.

One comment cautioned against assuming these “New Americans” would want to assimilate. The interest was in navigation, not assimilation, and the navigation was through the system, focused on benefits.

Another commented that not all the New Americans would want work permits; rather, many immigrant women wanted to be home with their children and not work, provided taxpayer benefits are secured for them and their children.