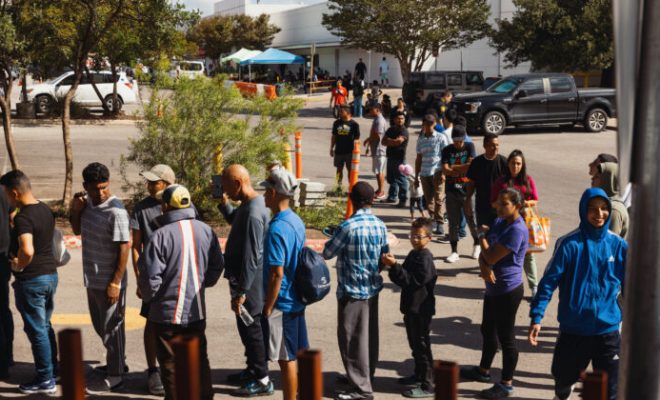 Venezuela is deliberately releasing prisoners, among them violent criminals, and has them travel to the U.S. southern border, a development that prompted 14 House Republicans to write to Homeland Security Secretary Alejandro Mayorkas.

Rep. Troy Nehls (R-Texas), who is leading the Republican effort to have Mayorkas answer questions, said in the Sept. 22 letter that the decision by the Nicolas Maduro regime has put the United States “in grave danger.”

“We write you with serious concern about a recent U.S. Department of Homeland Security (DHS) intelligence report received by Border Patrol that instructs agents to look for violent criminals from Venezuela among the migrant caravans heading towards the U.S.-Mexico border,” the letter says, citing a recent report from Breitbart.

The outlet reported on Sept. 18 that it had reviewed the DHS intelligence report from an unnamed source within the U.S. Customs and Border Protection (CBP). The report warned that released prisoners—including those convicted of murder, rape, and extortion—had been seen within migrant caravans traveling from Tapachula, Mexico, to the southern border, as recently as July.

Hours after Breitbart published the report, Nehls took to Twitter to announce that he had obtained confirmation from the DHS.

“DHS confirms that Venezuela empties prisons and sends violent criminals to our southern border,” Nehls wrote. “President Trump warned us about this years ago.”

Former President Donald Trump issued such a warning several times in 2021. He did it again last week while speaking to radio show host Hugh Hewitt, when he said America had become a “dumping ground” as other nations were “emptying their prisons into the United States.”

Nehls later commented on the Breitbart report during an interview with Fox News contributor Sara Carter on Sunday.

“This bombshell report confirms what we’ve known for years,” Nehls said. “Our adversaries despise what America stands for and take pride in emptying their prisons filled with the most violent and sick individuals to walk the earth and send them to our southern border, where they know they’ll have no trouble getting in.”

Nehls added, “Our overworked border patrol agents can only do so much when President [Joe] Biden gives everyone a no-strings-attached invitation into this country.”

The letter comes as the United States is seeing an influx of migrants along the U.S.-Mexico border. According to CBP data, the number of migrants arriving at the southern border in fiscal year 2022 surpassed 2 million in August, with unprecedented numbers coming from Cuba, Nicaragua, and Venezuela.

The letter points out that there have been more than 130,000 encounters with Venezuelan nationals between October 2021 and July 2022.

“As a result of the Biden Administration’s disastrous border policies, it is unknown how many of the violent Venezuelan prisoners have been released into the interior of the U.S., as identifying Venezuelans with criminal records is nearly impossible unless the individual admits their records to U.S. authorities,” the letter says. “This will undoubtedly put our country in grave danger.”

The 14 Republicans want Mayorkas to answer more than 10 questions, including the precautions DHS is taking to prevent these Venezuelan criminals from entering the United States.

“Have any of the Venezuelan nationals encountered at the southern border this year been suspected to be released prisoners?” says one of the questions. “Does DHS have a projected headcount of how many released Venezuelan prisoners are expected to enter the U.S.?”

Another question asks, “Do you have reason to believe that the release of the convicts could be a purposeful geopolitical move specifically intended to impact U.S. national security?”

“We need transparency and accountability from this administration,” Nehls wrote on Twitter.

Related Items
USA First Reporting
← Previous Story Top ICE Official Makes Harrowing On-Camera Admission About What the Biden Administration Is Doing at the Border
Next Story → Why Is The Capitol Police Setting Up Regional Offices Across The Country?