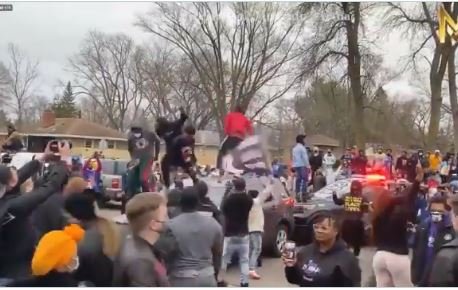 Protesters clashed with police officers in Brooklyn Center on Sunday after an officer fatally shot a driver.

A BLM crowd gathered in Brooklyn Center on Sunday evening after a female police officer reportedly shot and killed a black person.

According to reports there was an officer-involved shooting in Brooklyn Center near 63rd Ave N and Kathrene.

One man was downed by a rubber bullet.

Here is the livefeed from Unicorn Riot

This type of protest has the left’s stamp of approval.

we do not need cops who will kill on impulse and try to take away guns from the law abiding and consficate guns or arrest people for the Marxist democrats ! defund them and abolish all police!

Defunding and abolishing police is stupid, unless you want total anarchy. Few people are truly prepared for the mayhem and chaos that would follow.