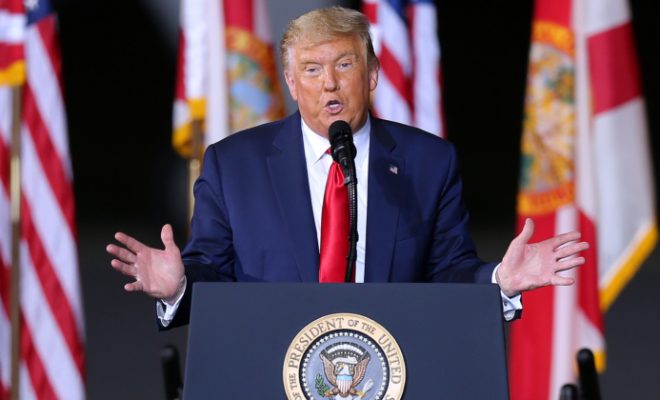 Former President Donald Trump on April 5 criticized the governor and lieutenant governor of Georgia for allegedly forcing the state’s legislature to water down a set of election reforms enacted late last month.

“Too bad the desperately needed election reforms in Georgia didn’t go further, as their originally approved Bill did, but the Governor and Lt. Governor would not go for it,” Trump said in a statement released through his Save America political action committee.

“The watered-down version, that was just passed and signed by Governor Kemp, while better than before, doesn’t have Signature Matching and many other safety measures, which were sadly left out. This Bill should have been passed before the 2020 Presidential Election, not after,” the former president added.

Georgia Gov. Brian Kemp signed an election reform bill (pdf) on March 25 that replaced signature matching for absentee ballots with a requirement that people voting by mail provide their driver’s license or state ID number or a photocopy of an alternate form of identification.

In a statement following the signing of the bill, Kemp said it would make it harder to cheat and easier to vote.

Some election experts say the bill doesn’t go far enough to protect the integrity of the elections. Former Kansas Attorney General Phil Kline wrote an op-ed shortly after the bill’s passage pointing out that the new law does little to prevent the infusion of private money into election infrastructure. Billionaire Facebook founder Mark Zuckerberg donate more than $400 million during the 2020 election cycle to local election authorities. Much of the money went to Democrat-leaning localities in swing states, according to Kline.

The election reforms in Georgia have become the target of left-wing attacks, disinformation, and boycotts. Delta and Coca-Cola issued formal statements criticizing the new law. Major League Baseball moved the annual All-Star game out of Atlanta to express its “values as a sport” in response to the passage of the measure.

“Boycott all of the woke companies that don’t want Voter I.D. and Free and Fair Elections,” the former president said.

Trump also claimed that “the Democrats in Georgia really push the Republicans around.”

As an example, the former president referred to the consent decree signed by Georgia Secretary of State Brad Raffensperger, which made it nearly impossible to reject absentee ballots based on signature mismatches. The new election reforms limit the kind of decrees the Peach State’s secretary of state can enter into going forward.

The former president also addressed the ongoing controversy surrounding more than 400,000 chain-of-custody records for absentee ballots in Georgia. Only 56 of Georgia’s 159 counties have produced their records in response to requests by Georgia Star News, the publication reported early last month.

“It is now reported that chain of custody records for over 400,000 Absentee Ballots are missing or not being shown. I wonder why? Show them now!” Trump wrote.