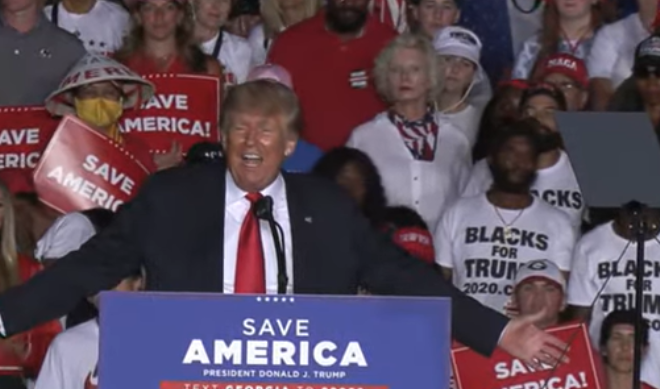 President Trump slammed the fake news for reporting that the Maricopa County audit in Arizona declared Biden “won” the 2020 election.

In his speech Trump reported the official results of the Maricopa County Audit and named a list of findings by the forensic audit group Cyber Ninjas.

Trump started off by saying that 23,444 mail-in ballots were counted from voter’s prior addresses and followed that up by stating 9,041 more ballots were received then were ever sent out.

Trump then told the crowd that all he needed was 10,000 votes to take the state away from Biden.

After making that quick interjection he went on to say 5,295 voters potentially voted in other counters, 3,432 votes don’t match names of people who voted, and that 1,551 excess votes were counted.

He also stated that over 17,322 duplicate ballots were also cast and gave reference to Dr. Shiva’s findings.

You can watch Trump declare the results here:

Here’s is the executive summary of the audit by Cyber Ninjas:

This audit has been the most comprehensive and complex election audit ever conducted. It involved the hand counting of 2.1 million ballots, a forensic paper inspection of all ballots, a forensic review of the voting machines, and an in-depth analysis of the voter rolls and the 2020 General Election final files.

What has been found is both encouraging and revealing. On the positive side there were no substantial differences
between the hand count of the ballots provided and the official election canvass results for Maricopa County. This is an important finding because the paper ballots are the best evidence of voter intent and there is no reliable evidence that the paper ballots were altered to any material degree.

Based on our other findings, however, we recommend that the Legislature tighten up the election process to provide
additional certainty going forward, and that several specific findings of our audit be further reviewed by the Arizona
Attorney General for a possible investigation. Such other findings include the following:

• None of the various systems related to elections had numbers that would balance and agree with each other. In
some cases, these differences were significant.

• There appears to be many 27, 807 ballots cast from individuals who had moved prior to the election.

• Files were missing from the Election Management System (EMS) Server.

• Logs appeared to be intentionally rolled over, and all the data in the database related to the 2020 General
Election had been fully cleared.

• On the ballot side, batches were not always clearly delineated, duplicated ballots were missing the required
serial numbers, originals were duplicated more than once, and the Auditors were never provided Chain-ofCustody documentation for the ballots for the time-period prior to the ballot’s movement into the Auditors’
care. This all increased the complexity and difficulty in properly auditing the results; and added ambiguity into
the final conclusions.
• Maricopa County failed to follow basic cyber security best practices and guidelines from CISA

• Software and patch protocols were not followed

• Credential management was flawed: unique usernames and passwords were not allocated

• Lack of baseline for host and network activity for approved programs, communications protocols and
communications devices for voting systems