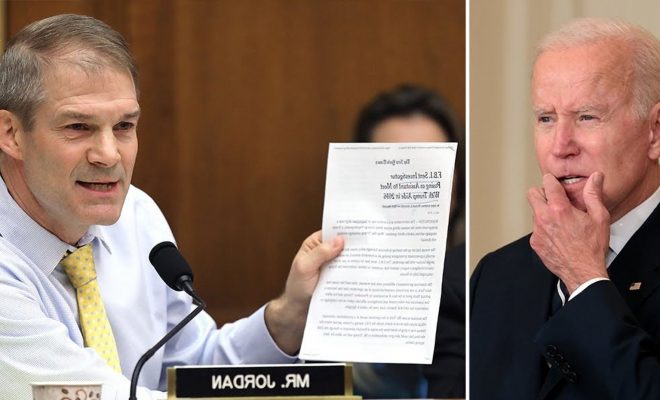 Ohio Republican Rep. Jim Jordan believes he is seeing a significant shift regarding the ongoing federal investigation of first son Hunter Biden and expressed his views during a Fox News appearance.

In an interview with Maria Bartiromo, Jordan suggested “something is up” with the probe because of a new — and sudden — interest in the story by many of the same legacy media outlets that initially dismissed early reports of corruption evidence stemming from materials and emails obtained from a laptop he reportedly abandoned at a computer repair store in Delaware in 2019.

Jordan told Bartiromo that it “sure seems” as though Hunter Biden is going to be indicted by federal officials though he said he could not say for certain.

The Ohio lawmaker pointed to an increase in reporting regarding authentication of contents of a laptop believed to be Hunter Biden’s as it coincides with a wave of grand jury activity.

“You mentioned those two stories from the Washington Post 10 days ago,” the Ohio Republican told host Maria Bartiromo on Fox News.

“And now, finally, it is, ‘Well, Joe had something to do with it, but he really didn’t do anything wrong.’ In fact, that’s what his chief of staff, Ron Klain, told us last Sunday on the Sunday shows,” he added.

“It sure looks like Joe Biden was involved,” Jordan told Bartiromo. “So, my, how this story has changed. And now, we find out these text messages and emails that link the entire family, not just Hunter and Joe and — but also uncle, the — Joe’s brother, James Biden, is involved in this as well.”

Last week, a House committee has voted on a resolution to open an investigation into first son Hunter Biden over allegations of shady business dealings and illegal actions.

On a party-line vote, the House Oversight Committee rejected a Republican-led effort to seek documents related to the Biden family’s business dealings in countries like Russia, Ukraine, and China by a vote of 23-19.

Hunter Biden has reportedly been under federal investigation for years, with prosecutors looking at allegations that he skirted foreign lobbying and tax laws. In addition, Republicans have charged that he lied on a federal firearms background check form when he reportedly answered “no” to a question involving a previous addiction to cocaine.

Other Republicans have made similar threats to hold both Hunter Biden and his president father accountable.

In March, Rep. Darrell Issa (R-Calif.) told the “John Solomon Reports” podcast that letters will be sent to intelligence experts, the media, and big tech to preserve evidence and will set the stage for subpoenas and an investigation into why the Hunter Biden laptop story was smacked down in the weeks before the 2020 election.

Issa is likely to head the House Oversight Committee if the Republicans win back the House and would be in charge of the investigation if it happened.

“What I can’t live with is the fact that when the New York Post, one of the oldest print newspapers in the country, founded in 1801, comes out with credible evidence, which they can show how they got it, what their sources were — there were no hidden sources on this — they not only got shut down by … Facebook and Twitter but they got shut down by the New York Times, by public broadcasting, by virtually everyone,” said Issa.

“And they were shut down by having more than 50 of the most informed people in the intelligence world all saying that they knew that this was false information. That is a conspiracy of monumental size,” the California Republican said.

In June, Republican members of the committee argued that Hunter Biden must be investigated amid concerns that “he is continuing to profit off” his father’s name.