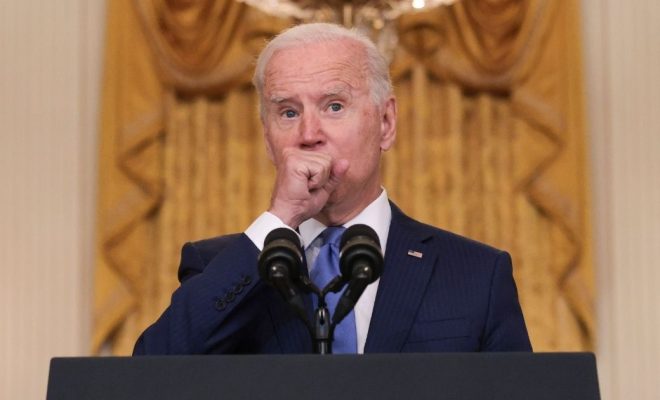 For four long years, leftist Democrats whined about former President Donald Trump’s repeated refusal to release his tax returns, claiming that he must be hiding something.

Well, if a new report is to be believed, President Joe Biden was the candidate with something worth hiding.

The president “improperly avoided paying Medicare taxes before he took office” and could owe the IRS up to $500,000 in back taxes, according to the New York Post.

The president’s alleged avoidance of paying his taxes was revealed in a report drafted by the Congressional Research Service at the request of Republican Indiana Rep. Jim Banks.

Following the document’s release, Banks excoriated the president for his reported hypocrisy, saying “Joe Biden wants to raise taxes by $2.1 trillion while claiming the rich need to pay their ‘fair share.’ But in 2017, multi-millionaire Joe Biden skirted his payroll taxes — the very taxes that fund Medicare and Obamacare.”

“According to the criteria CRS provided to my office, he owes the IRS and the American people hundreds of thousands of dollars in back taxes,” Banks said, according to the New York Post.

“Every American should know about Joe Biden’s tax hypocrisy.”

According to Banks, in 2017 and 2018, Biden avoided paying Medicare taxes on various fees related to both book sales and speaking fees by using “S corporations” improperly.

While the report from CRS never names Biden specifically, it does analyze cases where the IRS held various taxpaying individuals accountable who had been paying themselves relatively low salaries through S corporations, counting most of the revenue as “distributions” which then exempted them from Medicare tax.

According to The Wall Street Journal, the president and first lady Jill Biden have reported over $13 million through S corporations.

Less than $800,000 of that was counted as salary eligible for the Medicare tax, meaning the Bidens could very well have avoided paying the tax on the remaining millions.

This news, highlighting possible tax irregularities on the part of Biden, is especially revealing given what the media was talking about nearly a year ago to the day.

Then, following its publication, that very same article came with its own fact check hidden 77 paragraphs after the above quote, admitting that Trump had actually paid $1 million in taxes in 2016 and $4.2 million in 2017.

Suffice it to say, the establishment media went out of its way to excoriate Trump for possible improprieties when it came to his own taxes.

Sadly, it’s unlikely those outlets will hold Biden’s feet to the fire in any sort of similar fashion — especially after they all spent an entire election cycle working to ensure he won the presidency.

If this is true and I believe it probably is then arrest Joe Biden now1 Arrest him and put him inhandcuffs on TV for all to see this crook for what he is a real crook.

We all know this is the factual truth. The silly son-of-a-bitch is a crook at the top of the crook chain. You idiots that voted for the lying, child molesting idiot are a special kind of stupid. Obiden has been corrupt since birth and will never admit any wrongdoing. We have the corrupt bastard with his hand in many cookie jars and the crooked media turns a blind eye to his crimes. Iweep for the future!