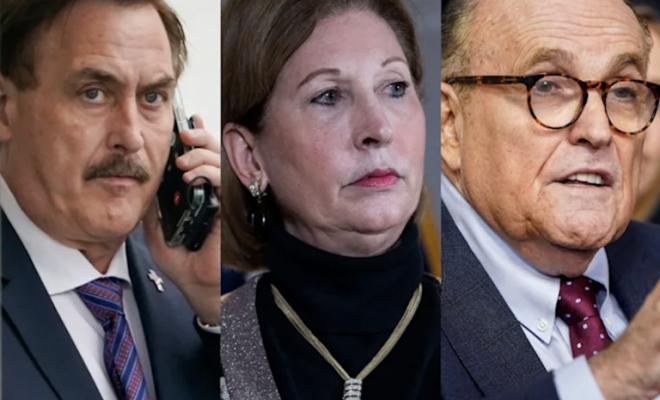 The Left Reveal Strategy to Destroy Giuliani and All Trump Supporters

Remember a few months ago when politicians like Alexandria Ocasio-Cortez (D-NY) wanted to scour the internet and gather lists of Trump supporters? Based on what we’ve seen in the media, it looks like Rudy Giuliani was towards the top of that long list of names.

What they are doing to the former mayor of New York City is upsetting, but gives us a clear idea of what their plan of attack will be against Trump supporters as a whole.

Maxine Waters declared open season on Trump allies as early as 2018 as cited by Politico:

She urged her supporters at a rally to confront administration officials face-to-face in response to the separation of parents and children at the border. That was after a Virginia restaurant refused to serve White House press secretary Sarah Huckabee Sanders and protesters confronted Homeland Security Secretary Kirstjen Nielsen during a dinner at a Mexican restaurant in Washington last week.

“If you see anybody from that Cabinet in a restaurant, in a department store, at a gasoline station, you get out and you create a crowd and you push back on them and you tell them they’re not welcome anymore, anywhere,” Waters said Saturday in Los Angeles.

That remark earned an implied rebuke from House Minority Leader Nancy Pelosi on Twitter on Monday. And Republicans are seizing on it as they try to make the case to GOP voters that it’s critical for the party to keep control of the House.

Nancy Pelosi wasn’t happy with Maxine when she declared an all-out war on conservatives. It’s not because she has a soft spot in her heart for Trump fans. The reason was that Maxine let too much out of the bag, too soon.

They needed to wait for Biden to take office to be able to start their plan to punish those that stood against their views.

Unfortunately for them, the war on conservatives has been an absolute failure. Even with Biden in office and Mitch McConnell handing them two Georgia senate seats, everything they’ve tried has backfired.

Blue states lost house seats while red states saw millions relocate to them as if escaping a zombie apocalypse.

More state-wide, pro-life legislation has been passed than the last two years combined.

By all accounts, conservatism is on the rise. Despite their shouting, people are refusing to do what they’re told. This is good news for us, devastating for them.

The left has been in panic mode for months now and based on what we’ve seen with mayor Rudy, they are ready to unveil their latest plan of attack to punish Trump supporters.

Since they can’t seem to win in the courts of public opinion, they have decided to try and win, in the actual court system.

The new strategy of the left has been to figure out a way to get Trump allies and supporters into the courts where they can be bled dry by legal fees. They are going to try and bankrupt conservatives!

Michael Cohen, former Trump Lawyer and media darling of the left laid it out during an NBC interview discussing mayor Rudy’s legal battle:

They should be sitting now with prosecutors because Rudy knows exactly how the game is going to go. He created the rules. He created the rules to go after organized crime and their going to use the same playbook that he created against him. And it works because they squeeze you. And they know that Rudy right now is financially strapped. So when you’re financially strapped, how are you going to pay the millions of dollars? You think Dershowitz is gonna work for free?

That’s right, the left is going to use the same playbook Rudy used in New York City to prosecute murderers, drug dealers and organized crime lords on Trump supporters.

As a prosecutor and then mayor of New York City, Rudy Giuliani would get criminals into the courts and then tie them up in legal battles for years until their funds ran out. Unable to afford a solid defense, they eventually accepted defeat and gave up the next person up the criminal food chain.

It’s troubling that the left has decided that conservatives need to be treated in the same fashion as drug traffickers and extortionists.

The left’s newly minted plan of attack has been working against Rudy and they’ve essentially backed him into a corner.

Unless there is some sort of intervention, the former mayor that kept New Yorkers together during the worst domestic attack in American history, is going to spend the remainder of his years behind bars.

His crime? Nothing more than to ensure that the integrity of the November elections was maintained. According to Michael Cohen and the left, the pursuit of fairness and justice is considered nefarious and worthy of prison.

Once the left realizes how effective this strategy is, we are going to see the courts packed with Trump supporters being bled dry by the left through the legal process.

It will only be a matter of time before they go for conservative businesses and hard-working Americans as well.

It’s going to be interesting to see what the voters will have to say about this during the midterm elections. While the left tries underhanded tactics to seek revenge against their political rivals, it will be up to voters to decide if this is the America they want to live in.