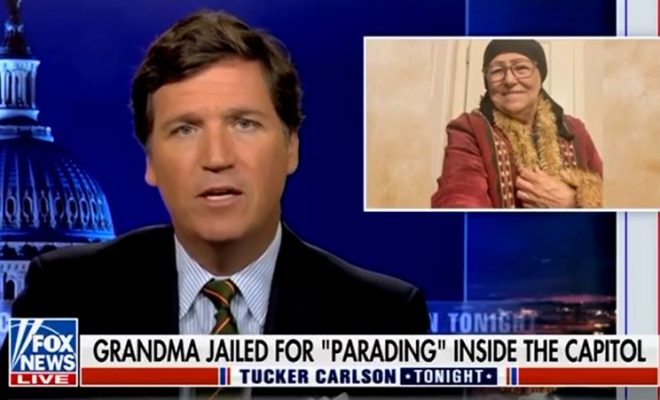 As you might have heard, the Stephen Colbert staffers that committed an “insurrection”, as the left might say, by breaking into the Capitol were let off of the hook, with the charges against them being dropped despite the fact that they were very obviously caught entering the Capitol unlawfully.

With many January 6th protesters still locked up in the gulags of DC despite having committed, if anything, the same crime as the Colbert staffers. Both were simply trespassing and entering the Capitol when they weren’t supposed to, so one would expect them to be treated in the same manner.

But they weren’t. The Colbert staffers were let off the hook and the charges were dropped while the January 6th political prisoners rot in horrible conditions in D.C. jails.

As a result, many conservatives have taken to attacking the “corruption” and “hypocrisy” in what they see as a two-tiered justice system exemplified by the leftists getting off scot-free while conservatives rot in jail.

Among the conservatives making that argument were Tucker Carlson and Sean Hannity, both of whom ripped into the DC “justice” system for how it treats woke criminals and conservative protesters differently.

Sean Hannity, for example, discussed the issue with Just the News’ John Solomon, who said:

“When [the police] got there, the staffers admitted they knew what they were doing was wrong, they get arrested, and then Biden Justice Department, like so many other times, the two-tier justice system, they let them off without any criminal penalty. A lot of people upset with that tonight. Congressman Rodney Davis just issued a statement saying it is proof of a two-tier justice system.”

“Yeah, and we have a politicized Department of Justice and we don’t have equal justice under the law or application of our laws. If it was the ‘Hannity’ 9, I think it would be a different story tonight. I think I would be doing the show from prison, if they let me.”

Tucker made much the same point in his monologue, ripping the two-tiered justice system as “corrupt” and saying:

“Now, at the sentencing, Judge Lamberth admitted he wanted to make an example out of this elderly woman. Why? Because he was frustrated that a defendant in a separate case made statements that were ’embarrassing to me.’ That actually happened. And therefore, because he was embarrassed by somebody else, Lamberth decides to take it out on this elderly woman, and that is horrible. That is not justice, it’s the opposite.

“And it gets worse. At the same time this was happening, U.S. Attorney for D.C., at the same point they were sending an elderly cancer patient to jail, this same U.S. Attorney’s Office announced they were dropping charges against nine members of Stephen Colbert’s production crew.”

“So here are the new rules: If you are a regime propagandist, you can do whatever you want. You can trespass in the Capitol, you won’t be charged by Joe Biden’s prosecutor. But if you are an elderly cancer patient who votes the wrong way, you go to prison. Those are two standards, one justice system. That’s corruption.”