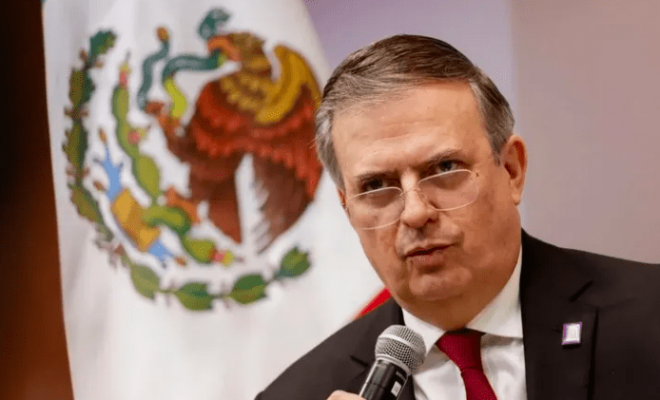 As record numbers of illegal immigrants continue to cross the U.S.-Mexico border – because of Biden’s lax immigration policies – the Mexican government is beginning to take issue with the lack of control at the border.

On Wednesday, Foreign Minister Marcelo Ebrard paid a visit to Juarez, Mexico, and insisted that the U.S. needs to do more to inhibit cartel gun trafficking into Mexico.

According to the Border Report, AR-15s, AK-47s, 9mm guns, and .50-caliber sniper rifles are some of the weapons being smuggled into Mexico.

“You have no reason on (your) territory to let someone with weapons cross into Mexico when you know it is illegal to have those weapons in our country. […] We are asking, at the very least, for a similar effort,” said Ebrard.

Ebrard reported that 500,000 guns are crossing the U.S. border into Mexico each year. “Mexico in its territory is seizing five times more weapons than the United States is seizing weapons headed to Mexico on its side,” added Ebrard.

This is not the first time that the U.S. has been criticized for its border patrolling capabilities. In June, Mexico’s President Andres Manuel Lopez Obrador criticized the Biden regime’s “lack of control” of the U.S. southern border after 50 migrants were found dead in Texas after a failed smuggling attempt.

Lopez Obrador tore into the U.S. government’s lack of preparedness and control under Biden’s leadership, saying, “It happens because there is trafficking of people and a lack of control, in this case at the Mexican-U.S. border, but also in the U.S. interior.”