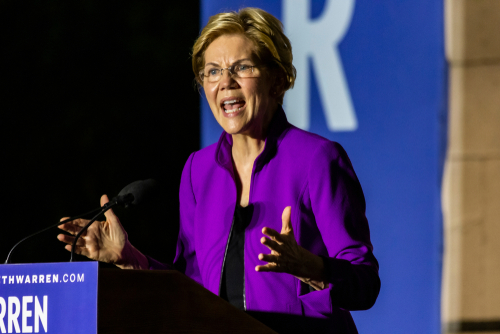 Democrats are working to have your credit card companies start watching you and submitting to the government as President Joe Biden calls “MAGA Republicans” fascists. The hypocrisy!

The lawmakers claimed that a new MCC might assist banks and credit card firms in identifying suspect gun purchases, which would aid law enforcement in preventing some mass shootings. An additional note is that MCCs are International Organization for Standardization (ISO)-maintained four-digit identifiers that categorize businesses according to their primary function.

“The creation of a new MCC for gun and ammunition retail stores would be the first step towards facilitating the collection of valuable financial data that could help law enforcement in countering the financing of terrorism efforts,” the letter stated. “A new MCC code could make it easier for financial institutions to monitor certain types of suspicious activities including straw purchases and unlawful bulk purchases that could be used in the commission of domestic terrorist acts or gun trafficking schemes. Such coordination between financial institutions and law enforcement has been instrumental in efforts across the federal government to identify and prevent illicit activity.”

People were eager to point out in response to Warren that her plan for private financial tracking and government coordination sounds awfully fascist.

There are so many issues with this idea that it’s difficult to even begin to address them all.

Credit card corporations as an institution are thrust into uncharted territory, for one. Credit cards are meant to be used as a convenience, not as a proxy for government surveillance or a measure of social acceptance of your spending habits. Mission creep like this moves us closer to a “Social Credit Score” system a la China, where privacy is nonexistent, and the government tracks your every move in order to punish you if you do anything it doesn’t like.

Second, we can’t lose sight of the fact that this particular action enjoys constitutional protection. When it comes to protecting ourselves, we have a constitutional right to keep and bear guns, thanks to the Second Amendment. Americans who purchase firearms, even in large quantities, are doing nothing more than exercising their constitutionally protected rights.

After all is said and done, this intrusive plan will achieve nothing. Warren and her supporters claim this will aid their efforts to prevent mass shootings, but this is highly unlikely to be the case. After all, a shooter who was dead set on getting his hands on some equipment might easily do so with cash. That’s how simple it would be to get around this law.

You can wager that once news spread out that law enforcement and credit companies were tracking these purchases, most real criminals and murderers would cease using credit cards for these transactions, meaning that almost everyone caught up in these untrue red flags would indeed be innocent people trying to exercise their constitutional rights.

Related Items
USA First Reporting
← Previous Story Russiagate Lawsuit DISMISSED, Judge Compromised?
Next Story → Unbelievable! This is the Leading Cause of Death in the US Army