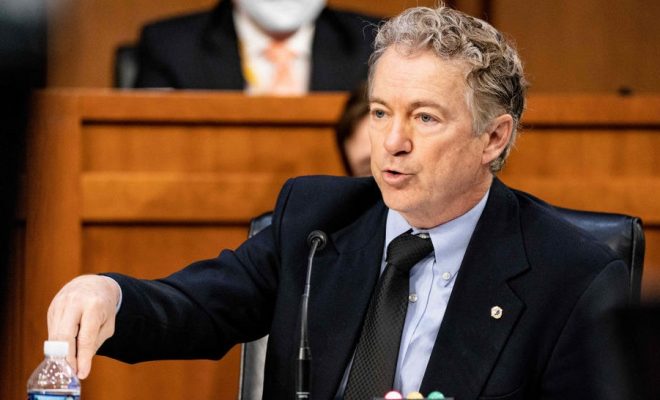 Rand Paul: MLB ‘Might Be A Little Too Woke’ If League Does Business With Chinese Communists While Boycotting Georgia

Paul took a jab at the league on Twitter a day after commissioner Rob Manfred announced that the MLB was moving its July all-star game and 2021 draft out of Atlanta in protest of election reforms signed into law last month.

“Your sports league might be a little too woke if it will freely do business with Communists in China and Cuba, but boycotts a US state that wants people to show an ID to vote,” Paul wrote.

Your sports league might be a little too woke if it will freely do business with Communists in China and Cuba, but boycotts a US state that wants people to show an ID to vote. #MLBAllStarGame #mlb

On Friday, Manfred said that the MLB was relocating the all-star game and draft because it was “the best way to demonstrate our values as a sport.”

“Over the last week, we have engaged in thoughtful conversations with Clubs, former and current players, the Players Association, and The Players Alliance, among others, to listen to their views,” Manfred said in a statement. “I have decided that the best way to demonstrate our values as a sport is by relocating this year’s All-Star Game and MLB Draft.”

Two days prior to the announcement, the league extended a television deal with state-owned Chinese tech giant Tencent on Wednesday. The new deal grants Tencent the rights to stream MLB games to a number of Asian countries until 2023, according to Fox News.

In 2017, the MLB partnered with a state-owned Chinese group to grow the sport in China. The league announced a 10-year deal with the Beijing Enterprises Real-Estate Group Ltd. (BEREGL) in December 2017 to build numerous new baseball facilities across the country.

“We are thrilled to have a strategic alliance with Major League Baseball that seeks to enhance the playing level of professional baseball teams in China,” BEREGL chairman Qian Xu said in a statement. “This new relationship with MLB also will seek to provide Chinese youth with new facilities to participate in this great game while advancing their education and learning valuable life lessons.”

Jim Small, then vice president and head of the league’s Asia Pacific operations, added: “This relationship with BEREGL will seek to accelerate our growth and to provide first-rate facilities and coaching for the increasing number of Chinese baseball players. We are honored to team up with one of China’s most forward-thinking, innovative and successful companies as we build momentum for baseball in the country.”

In January, then President Donald Trump accused the Chinese state of committing genocide against religious minorities in Xinjiang, a supposedly autonomous region in China that has suffered a similar fate as Hong Kong as Beijing has increasingly cracked down on Xinjiang residents. As The Daily Wire reported:

Investigations and eye-witness accounts show that the camps are actually centers of abuse and sterilization, among other atrocities. China has been accused by experts and others of running “concentration camps” in an attempt to kill off the minority populations in the region.

According to a June report from The Jamestown Foundation, Chinese officials working the camps have forced pregnant Uyghur women to have violent abortions that often leave the women sterile. The aggressive abortion campaign has caused birth rates to plummet in parts of Xinjiang.

Related Items
USA First Reporting
← Previous Story Sen. Barrasso Says He Was Told to Delete Photos of Border Facilities
Next Story → Breaking: “Don’t Go Back to Their Products” Here is the List of Companies for Which President Trump has Called A Boycott So Far…
Subscribe
0 Comments
Inline Feedbacks
View all comments