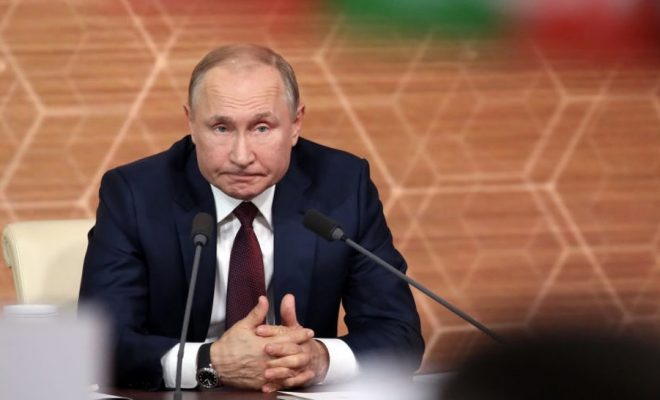 On Monday, Russian President Vladimir Putin signed a law that would allow him to run for two additional terms, potentially giving him power in the country until 2036.

The constitutional changes were voted on last year and included a part that allowed Putin to run for two more terms by resetting his term limits. The legislature, controlled by the Kremlin, approved the adjustment and Putin signed the relevant law. The law was posted to an official portal of legal information on Monday, as reported by the Associated Press.

His current term is six years and he has said that he will decide at a later date if he is going to run in 2024, the outlet reported. Putin is 68 years old and is the longest-serving Kremlin leader since the Soviet dictator Josef Stalin held power in Russia.

Putin has reportedly argued that making the change was needed in order to ensure his lieutenants stayed focused on their tasks instead of “darting their eyes in search for possible successors.”

The Kremlin has been watched by the world lately as Putin critic and opposition leader Alexei Navalny remains in prison after being arrested following his return to Moscow from Germany, where he was recovering after he was poisoned by a nerve agent. The Kremlin has denied any involvement with the poisoning. However, Navalny holds Russian authorities responsible for his poisoning. The U.S. intelligence community has also “concluded with high confidence that Navalny was poisoned last year with a banned nerve agent called Novichok by the Russian security services,” according to Politico.

Alexei Navalny has requested medical care while in prison but his condition is reportedly worsening. He announced a hunger strike recently, and was moved to a medical facility on Tuesday.

The United States has also had recent exchanges with Russia. Last month, Putin responded to President Joe Biden saying that the Russian president was a “killer” during an interview with ABC News. Putin challenged Biden to a discussion during a live broadcast event, as reported by The Daily Wire.

“I would say to him: I wish you good health,” Putin initially said on Thursday. “Although they think we are the same as them, we are different people; we have a different genetic and cultural-moral code. But we know how to defend our own interests, and we will work with them but in those areas in which we are interested and on terms we consider favorable for us. And they will have to reckon with that.”

Later, when speaking on television, Putin, according to Reuters, “cited a Russian children’s playground chant to scathingly respond to Biden’s accusation with the comment that ‘he who said it, did it.’”

“I want to offer President Biden to continue our discussion but on the condition that we do it live, online, without any delays but in an open, direct discussion,” Putin said.

White House Press Secretary Jen Psaki was later asked about Putin’s challenge. At the time, she said that she did not have anything to report “in terms of a future meeting.”

Russia later upped the challenge, “saying that it has formally reached out to the Biden administration to arrange the meeting under the conditions that Putin offered and that it has yet to hear back,” The Daily Wire reported.