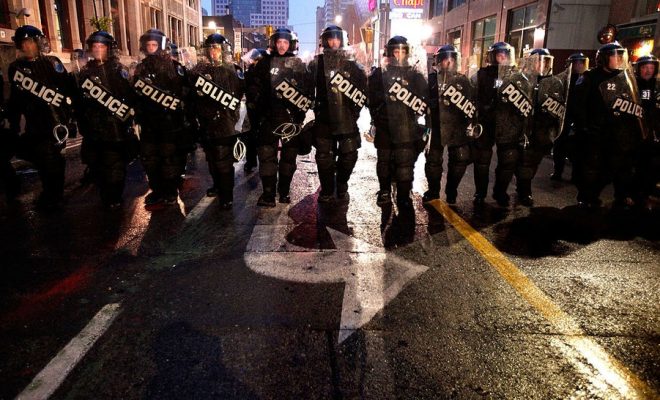 Some of the protesters who demonstrated against the Royal Canadian Mounted Police (RCMP) on Sunday after they erected a three-walled chain link barrier around GraceLife Church in Alberta, Canada, attempted to rip down portions of the barricade.

RCMP responded in force, decked out in riot gear and masks, according to video posted to social media.

Sheila Gunn Reid, a journalist with Rebel News who has spent two months with the GraceLife congregation as they have defied the provincial lockdowns on houses of worship, explained to The Daily Wire that the agitation was not because of anyone at the church.

“What I can tell you is that most of the congregation was with Pastor Coates today, who was holding services at an undisclosed location off-site to avoid any trouble,” she said. “For them, this is not about a building, it’s about being able to gather in-person. That’s why they got in trouble in the first place for not limiting the congregation for 15% of fire code capacity.”

GraceLife Church first made international headlines in February when its pastor, James Coates, was arrested and jailed for more than a month after holding church services in defiance of Alberta’s Public Health Order, which limited congregations to 15% capacity.

The RCMP repeatedly flagged GraceLife for not abiding by the order and later slapped the church with more charges when they continued to hold services during their pastor’s imprisonment.

Regarding rumors that circulated claiming that the fence had been pulled down by people attempting to make the church look bad, Reid tweeted, “I was there when the fence came down at GraceLife. It wasn’t a false flag. It wasn’t done by the church. It was outside agitators that did it against the wishes of congregation who wisely met elsewhere. The congregation could have pulled it down at any time.”

“The fence was pulled down by outside agitators – people not associated with the church,” Reid maintained to The Daily Wire. “I am aware of them from other fringe right-wing events. These people are sympathetic to the church, but not at all sanctioned by the church. As the fence was coming down, people I know from my many Sunday services with GraceLife were chanting to put the fence back up. Some young men from that side ran up and helped the police rebuild the fence. Then the two opposed groups engaged in some ‘rigorous debate.’”

“The church regularly prays for the police and even evangelizes to them,” Reid further observed. “I don’t speak for the congregation, but it’s been my experience that they are submitting to the consequences of their actions, as Christ did. That’s why Pastor Coates turned himself in February 16 for 35 days in maximum security custody.”

As The Daily Wire reported, Coates was imprisoned for more than a month in a maximum security facility in Edmonton after his church continued to meet in defiance of the provincial health order. The pastor said fellow prisoners were aware of his situation and came to him seeking spiritual advice.

John Carpay, who is serving as legal counsel for Coates and his church, recently spoke to The Daily Wire about his client’s case, describing it as a fight for the “fundamental rights and freedoms” of the Western world.

In a statement provided to The Daily Wire, the law firm representing Coates and GraceLife said in part:

Grace Life Church has no control of our Church or grounds at this time. The Church grounds are fully under the responsibility and control of the RCMP and Alberta Health Services. The closing of the Grace Life facility has understandably resulted in significant public outrage and caused even larger crowds to gather in one place. Albertans have a constitutional right to assemble, associate, and worship. By taking the measures the government has, while the matter is still pending before the Courts, the Alberta Government has created an even more divisive situation.