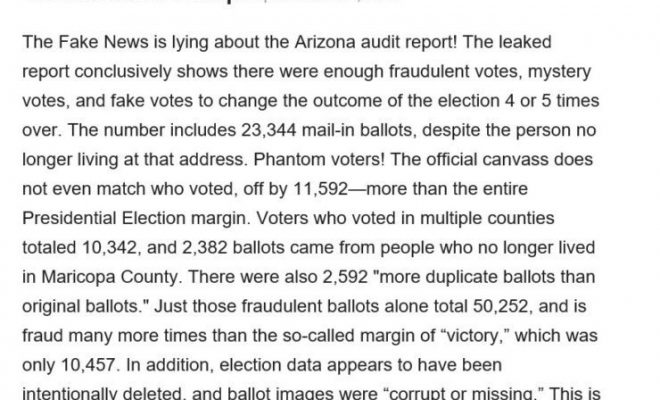 President Trump released several statements yesterday and this morning about the Arizona audit. The stunning information was released yesterday via podcast. The Gateway Pundit has an excellent point-by-point synopsis (see below) of the results of the audit that completely refutes the media’s claims that Biden won Arizona.

President Trump also names several of the items found in the audit:

“The Fake News is lying about the Arizona audit report!”

Ben Cotton (pictured below) shared the IT results from the audit of the 2020 Election Results in Maricopa County, Arizona.

During Cotton’s presentation, he said files were deleted by those involved in the election.

But the key and very important thing is that Cotton’s audit team was able to identify the time stamps for when the files were messed with and from that he said, “We have captured screenshots of Maricopa County people at the keyboards during those time periods.”

Cotton said they would not release the names of those involved in deleting the files.

According to Gateway Pundit, he also noted that files were not turned over that are required to be preserved under the law.  Those who deleted the files were identified at their computers deleting the files.  They got them!