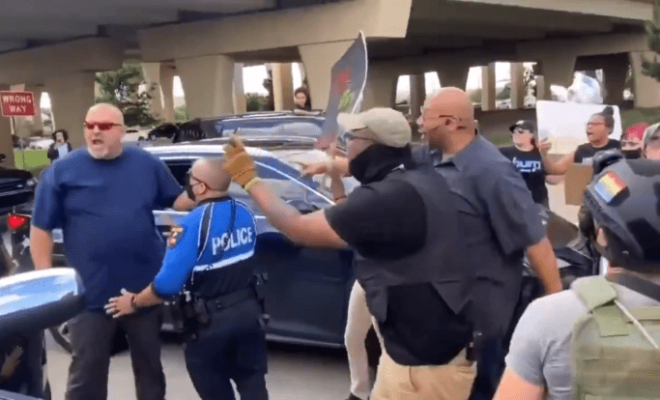 We all want to black the blue.  It is a mantra we have all said 1000 times and are desperate to believe in.

We also used to say ‘Texas will never go blue.  The things that happen in Seattle and California could never happen in Texas!’

Well, we were wrong on both accounts as both are becoming more and more compromised as terrible leadership everywhere coalesces around tyranny.

In a blood-boiling video, below, a Plano Texas police officer is seen openly supporting an armed and illegal BLM march through city streets that is clearly disrupting traffic.

Instead of arresting the people who are illegally and dangerously occupying city roads, a diminutive police officer seems to abuse his Constitutional authority and the citizens of Plano, TX.

The video shows the Lilliputian officer police officer standing idly by except to reprimand a law-abiding driver who is defending himself against a BLM thug and trying to get through the illegal BLM traffic jam.

What do you think?  Do you still blindly back the blue?  Do they represent you and the Constitution, or the Anti-American Critical Race Theorists that have infected cities around the country?

This is what Critical Race Theory does to institutions…and it is just the tip of the iceberg.  Things will get much worse from here if CRT is not snuffed out entirely.

Does this change your perspective?  Have all the good cops resigned in 2020 only to leave these pint-sized police officers behind?

This is the intentional result of terrible leadership.  Bad cops, like the one in this video, seem to only do what they are told by their leadership, regardless of what is lawful and constitutional.

So, what will you do on a (peaceful) local political level to ensure that this abuse of authority and justice does not come to your town?

It IS coming.  Pretending that it won’t is foolish.

The only question is, are you going to organize with your fellow citizens and stand up to it at your city council meetings en masse?  Will you demand proper leadership from your sheriff and remove Critical Race Theory from your local public institutions?  Will you elect Constitutionally-minded sheriffs to ensure that they will stand up for your Constitutional rights and the equal application of law?

These are solutions that you must enact in your home towns.

IT LOOKS LIKE ITS TIME TO PROTECT YOURSELF BY CARRYING SOME SORT OF SELF DEFENSE IN ANY FORM YOU CAN. THE BADDER THE BETTER. YOU’D RATHER NOT HAVE TO USE IT BUT FOR A DETERRENT ONLY , BUT ITS NICE TO HAVE IF YOU REALLY NEED IT….