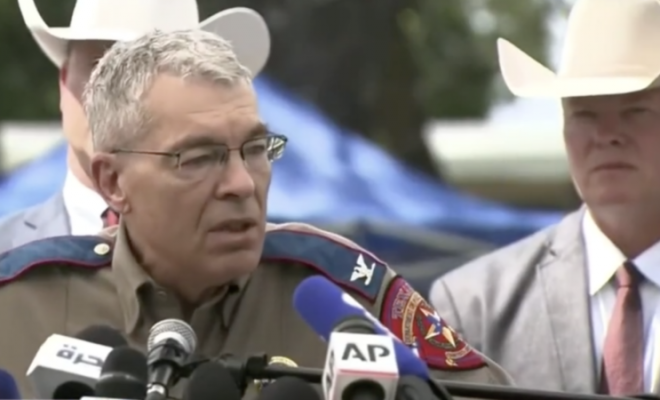 If they are trying to convince us this wasn’t a FalseFlag, they’re doing a terrible job…

And as always, let me define what that means.  A FalseFlag doesn’t mean the event didn’t happen.  It doesn’t mean people didn’t die tragically.  It means it may have been staged or put on under false pretenses to fulfill a Hegelian Dialectic goal.  Which makes the deaths all that more tragic and horrific.

But we investigate the truth here, and there are starting to be a LOT of things that don’t add up.

Like the initial reports that the police waited over an hour to go into the building.

Seriously, what the hell?

Those reports were initially denied but today have been admitted!

This is completely outrageous!!!

Not only did the cowardly police refuse to go in, but they prevented parents from storming the school.

You want to prosecute the George Floyd cop?

Then prosecute every last one of these cowards!

Can you imagine being those parents?

On the scene in 4 minutes and waited over an hour to go in!

COWARDLY does not even begin to describe it!

Or was a STAND DOWN order given?

And with that level of incompetence, you might immediately turn to the police scanner archive to see what was being said.

WAS A STAND DOWN ORDER GIVEN?

We may never know as reports are now alleging that anywhere from 12 to 18 minutes of police scanner data is MISSING from the archive.

I’ll let you guess which 18 minutes is allegedly missing, and if you said right at the absolute heart of the cowardly stand-down, you’d be right.

WE HAVE NOT YET BEEN ABLE TO IDENTIFY IF THE MISSING DATA IS ACTUALLY MISSING — AT THIS POINT WE ARE REPORTING ON THE MULTIPLE REPORTS FROM OTHERS THAT IT IS MISSING.

WE WILL CONTINUE TO INVESTIGATE TO SEE IF THIS IS CONFIRMED TRUE.

For now, these are the reports going viral:

Fire every last one of them:

WHO GAVE THE STAND DOWN ORDER?

If this was intentionally caused or made worse by anyone other than the shooter, they must be prosecuted to the FULLEST extent of the law!