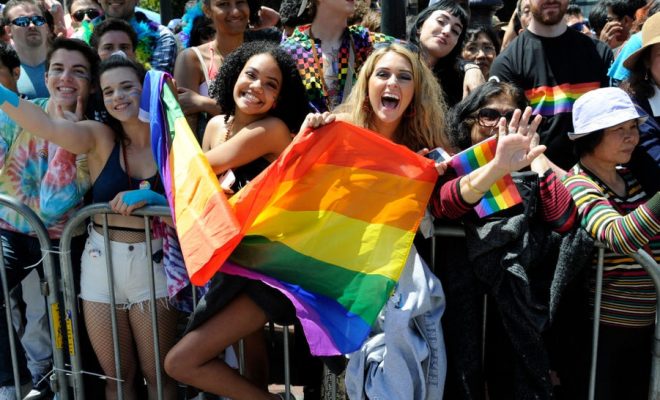 Number Of Young Americans Who Identify As LGBT Skyrockets: Poll

The number of Americans who identify as gay, lesbian, bisexual, or transgender has increased in recent years, especially among young people.

A Gallup poll released Wednesday discovered that self-identified LGBT people rose from an estimated 4.5 percent of the U.S. population in 2017 to 5.6 percent in 2021.

Among those who identified as LGBT, more than half claimed they are bisexual (54.6 percent), 33 percent of whom are in opposite-sex relationships. Almost a quarter identify as gay at 24.5 percent, 11.7 identify as lesbian, and 11.3 percent claim to be transgender. Around 3.3 percent identify as some other type of sexuality, such as “queer” or “same-gender-loving.”

As Gallup concluded, “Rebasing these percentages to represent their share of the U.S. adult population finds 3.1% of Americans identifying as bisexual, 1.4% as gay, 0.7% as lesbian and 0.6% as transgender.”

Journalist Glenn Greenwald, who is gay, speculated that the statistic showing transgender people outnumbering lesbians among Millennials and Generation Z could be a result of traditionally masculine girls being encouraged to identify as transgender.

The number who identify as LGBT has been steadily increasing with each generation, according to Gallup. The number grew from 2 percent or less of those born before 1965 to 9.1 percent of Millennials. That has since spiked to 15.9 percent of Generation Z or those born since 1997.

“The pronounced generational differences raise questions about whether higher LGBT identification in younger than older Americans reflects a true shift in sexual orientation, or if it merely reflects a greater willingness of younger people to identify as LGBT,” the Gallup report concluded. “To the extent it reflects older Americans not wanting to acknowledge an LGBT orientation, the Gallup estimates may underestimate the actual population prevalence of it.”

The poll also discovered a pronounced tilt among LGBT people toward political liberalism at around 13 percent. Only 4 percent identified as political moderates and a mere 2 percent claimed to be politically conservative.

The poll was based on more than 15,000 interviews done with adults in 2020. It has a margin of error of 1 percentage point.

Transgender behavior among children and young people has risen to the forefront of U.S. popular culture and politics. While a candidate, President Joe Biden claimed 8-year-olds should be able to identify as transgender. As The Daily Wire reported:

Answering a question at the ABC News-hosted townhall on Thursday night, Democratic presidential candidate Joe Biden stated that an eight-year-old child should be able to decide that they are transgender.

A woman asked Biden, “I’m the proud mom of two girls, 8 and 10. My youngest daughter is transgender. The Trump administration has attacked the rights of transgender people, banning them from military service, weakening non-discrimination protections, and even removing the word transgender from some government websites. How will you, as president, reverse this dangerous and discriminatory agenda and ensure that the lives and rights of LGBTQ people are protected under U.S. law?”

After telling a story about his father, Biden answered, “The idea that an 8-year-old child or a 10-year-old child decides, ‘I decided I want to be transgender. That’s what I think I’d like to be. It’d make my life a lot easier.’ There should be zero discrimination.”