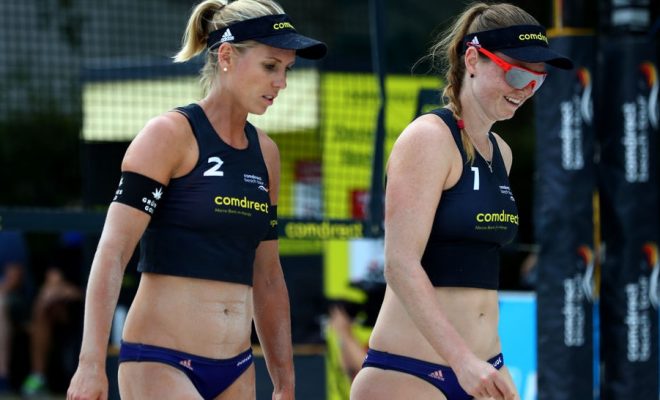 Two German beach volleyball stars are planning to boycott a tournament in Qatar because of its prohibition of wearing bikinis on court.

Karla Borger, who won a silver medal at the 2013 World Championships alongside her teammate Britta Büthe, told radio station Deutschlandfunk, “We are there to do our job, but are being prevented from wearing our work clothes. This is really the only country and the only tournament where a government tells us how to do our job – we are criticizing that. … We are asking whether it’s necessary to hold a tournament there at all.”

As a result of the no-bikini policy, Borger and her current teammate Julia Sude say they will boycott the Qatar tournament.

“The event in March is the first time that Doha has hosted a women’s beach volleyball event, after seven years hosting a men’s competition,” The Guardian notes.

According to the world beach volleyball federation, FIVB, Qatar’s requirement that women wear shirts and long trousers rather than the usual bikinis is a rule which is implemented “out of respect for the culture and traditions of the host country.” FIVB emailed Newsweek, saying it “respects the rights of all athletes to decide which events they compete in.”

“However, the organization added it ‘only received positive feedback’ when a ‘democratic consultation’ with players was held over the possibility of the tournament being held in Qatar,” Newsweek added.

In early January, the female Athletes’ Commission members collected opinions among athletes about hosting the event in Doha and an anonymous survey among the international beach volleyball players was also conducted. The FIVB worked closely with the QVA (Qatar Volleyball Association) to provide detailed information about the event, including uniform requirements and safety protocols in the bubble. The FIVB only received positive feedback from this consultation and no concerns regarding uniforms were raised. Players expressed their support for the initiative to hold the first-ever women’s beach volleyball tournament in Doha.

The Qatar Volleyball Association (QVA) is committed to ensuring that all athletes are made to feel welcome and comfortable at next month’s historic FIVB Beach Volleyball World Tour 4-star event in Doha. We have been in close consultation with the FIVB and have prepared for the event in line with the FIVB’s Code of Conduct.

We would like to make clear that we are not making any demand on what athletes should wear at the event. We fully respect the FIVB’s Code of Conduct and have demonstrated at numerous events in Qatar in the past, including the ANOC World Beach Games, that athletes are free to compete in international uniforms as they would in other countries.

We are greatly looking forward to welcoming some of the world’s best athletes to Doha for this prestigious competition and showcasing how during these difficult times Qatar remains able to host safe, inclusive and state-of-the-art sports events.

Borger pointed out to Spiegel magazine that the weather in Doha made it necessary to wear bikinis. Sude noted that when Qatar hosted World Athletics Championships in Doha in 2019, exceptions were made for female track and field athletes.

Related Items
USA First Reporting
← Previous Story Behar: FNC’s Tucker Carlson Should Be ‘Tied Up and Put in the Corner’– But Not Harmed
Next Story → Warning for America: The Four Steps of Marxist Takeover Were Activated in 2020
Subscribe
0 Comments
Inline Feedbacks
View all comments