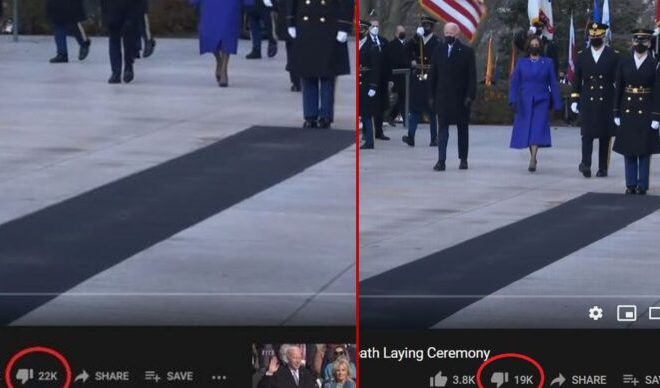 New Data: YouTube Has Been Scrubbing Millions of ‘Dislikes’ from Biden’s Videos

The social media platform YouTube is engaging in the duplicitous practice of scrubbing dislikes from Biden videos to protect the president’s political image, new data reveals.

The data, obtained by the Epoch Times, shows that YouTube has deleted an astounding 2.5 million dislikes from Biden’s videos.

“YouTube has deleted about 2.5 million ‘dislikes’ from videos on the official White House channel of President Joe Biden, according to data collected and posted online by a researcher who wished to remain anonymous,” the Epoch Times reported. “YouTube recently announced that it’s testing a new page design that hides the dislike count.”

“The Google-owned video platform allows users to give videos either a thumb up (like) or thumb down (dislike),” the report continued. “For at least two years, it’s had a policy to remove likes and dislikes it considers spam.”

“We have policies and systems in place to ensure that the engagement on YouTube is authentic, and remove any fraudulent metrics,” a YouTube spokesperson told The Epoch Times but “wouldn’t go into details on what criteria it uses to make these calls.”

“The White House videos have seen these kinds of interventions on an ongoing basis, but it appears it’s only the dislikes that are disappearing,” the publication added.

YouTube users have long noticed the phenomenon of the overwhelming number of dislikes disappearing from the videos of a president who reportedly got 82 million votes in the 2020 election — by far the most in U.S. history.

The following screenshots of Biden videos shows that the dislikes tend to far outnumber the likes.

Here is another screenshot of wreath-laying ceremony that had 22K dislikes compared to 2.9K likes.

A screenshot of the same video from today shows the video has 19K likes.

Biden’s first executive order signing ceremony video garnered an unbelievable 31K dislikes to 5.8K likes. It is now up to 43K dislikes with only 7.5K likes, suggesting that the deletion mechanism is inconsistently applied.

The National Pulse website catalogued other examples of Biden video dislikes. It also notes the huge disparity between Trump videos and Biden videos:

In contrast, President Trump’s latest address – live-streamed on the Right Side Broadcasting Network account – has over 145,000 likes and just 4,500 dislikes.

Numerous observers early on in Biden’s administration noted there appeared to be a scrubbing of dislikes.

here you have it: Youtube is removing millions of dislikes for Biden, who entered office with one of the lowest approval ratings on record. YouTube is the same company that has not only banned Donald Trump videos, but has even has deplatformed and censored pro-Trump content.

It makes you wonder all of the other ways the Big Tech is protecting Biden and ‘fortifying’ our nation’s elections.