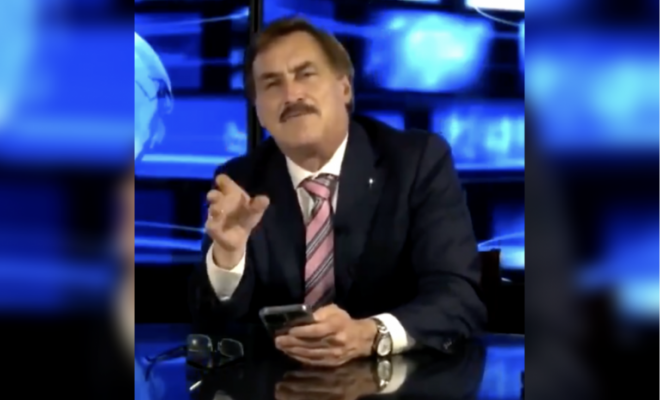 Mike Lindell  was recently interviewed by Steve Bannon on War Room and as always Mike brought the fire.

In his interview Lindell said that the 2020 election was the biggest cover up in history and followed it by saying that President Trump won Arizona by over 80,000 votes!

Mike then took aim at Dominion Voting Systems and said he was going to give “Dominion a little scare” and then stated that he has obtained Dominion machines.

That wasn’t it though Lindell also talked  about his upcoming Mother’s Day Rally with Lin Wood and gave details about the re-launch of frankspeech.com.

“This is the biggest cover up probably in history,” Lindell said of the stolen election. “It’s so massive.”

“I’ll give Dominion a little scare,” he said. “We have machines now. I do.”

Lindell said he will continue to lay out all the evidence on his platform Frank, and previewed his Mother’s Day rally with Lin Wood, Bikers for Trump at 3 p.m. in South Carolina.

Newsweek reported the story too but gave an extreme far left take:

Lindell offered his latest taunt towards Dominion on Real America’s Voice program, claiming that his personal probe into unfounded election voter fraud is currently conducting tests that will “prove” their machines were rigged in President Joe Biden’s favor.

Lindell’s baseless claim flies in the face of ongoing litigation between the voting machine maker and the MyPillow founder. In February, Dominion filed a lawsuit against Lindell and his company, alleging he defamed them by repeatedly claiming to have evidence their voting machines fraudulently flipped votes against Trump last November.

Looking to flip the $1.3 billion lawsuit back on Dominion, Lindell filed a $1.6 billion countersuit in April that claimed the machine producer is a “government actor” and suppressed his First Amendment and 14th Amendment rights. Despite the looming legal threat, Lindell once again publicly chastised Dominion this weekend in what could be a damaging mid-litigation remarks.

Hello kind Patriot Sir! Mr.Mike Lindell,thank you sincerely for ALL you do. The effort,energy,Patriotism & sacrifices you’ve made & continue to…The USA & the entire Earths people were robbed,on that farcical, most Un-American of days. So glad to know,that there are some Americans who haven’t just swept this catastrophe under the rug. #iStandWPresTrump
#JusticeForAll #AmericaFirst
#MyPillow #GodBlessUsAll