The gunmen are reported to have been armed with AK-47s.

The gunmen arrived at the scene in 3 separate vehicles before opening fire.

Police returned fire at the gunmen, leading to a gun battle.

It bears noting that just three days ago France thwarted a possible jihad ricin attack after intercepting messages on the secure social media platform Telegram, and a source in the Paris prosecutor’s office said an Muslim student was in police custody.

HOODED GUNMEN HAVE OPENED FIRE WITH AUTOMATIC RIFLES, KALACHNIKOVS, IN MARSEILLE, IN SOUTH FRANCE – WITH ONE PERSON REPORTEDLY INJURED. 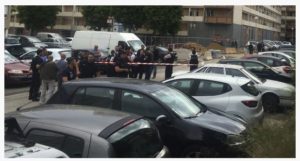 The men opened fire on a group of young people not far from the cultural space known as ‘La Busserine’, local media Corse-Matin reports.

Three vehicles with the masked individuals arrived in the city’s district of Busserine at 5pm local time, France’s ACTU17 said.

Police exchanged fire with the shooters and officers have set up a cordon.

At this time it is unclear if any arrests have been made, but police are investigating.

Marseille’s Marines-Pompiers, the city’s fire and rescue service, is also at the scene.

This is the second shooting in the city in a matter of weeks.

Last month a man, said to be in his thirties, was seriously injured in a shooting outside a restaurant in central Marseille

The victim was hit several times in a hail of bullets after two gunmen opened fire as he sat with a drink in a snack bar.

He was in “serious condition”, according to France TV, after being shot more than once in the legs.

There are said to be several witnesses to the brazen attack on Avenue Camille Pelletan.

Since the start of the year, six people have been killed in shootings in Marseille, France TV said.

And three more people have been killed in gun violence in the wider Bouches-du-Rhone area.