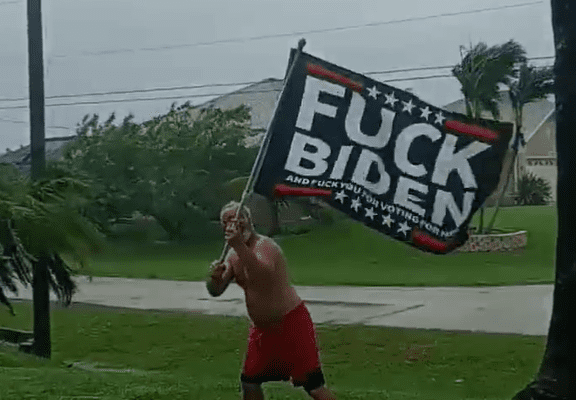 Hurricane Ian has landed and Florida has seen some major flooding and high winds within the last hour.

Most Floridians living in the red zone where Ian made landfall have evacuated others living on the outskirts of where the Hurricane has landed have not evacuated.

One man who decided not evacuate was seen waving a huge f*ck Biden in the middle of the storm.

Others however aren’t as lucky as this man and are facing major flooding take a look:

Hurricane Ian made landfall in Florida on Wednesday afternoon as a powerful Category 4 storm.

Maximum sustained winds were around 150 mph as it hit the southwest coast at the island of Cayo Costa near Fort Myers and Cape Coral.

By Wednesday evening, there were over 1.5 million power outages in the state and communities along Florida’s west coast had issued mandatory curfews.

The National Hurricane Center has warned of “life-threatening storm surge, catastrophic winds and flooding in the Florida Peninsula,” with millions under evacuation orders.

If you are currently in Florida, please stay safe my friends.