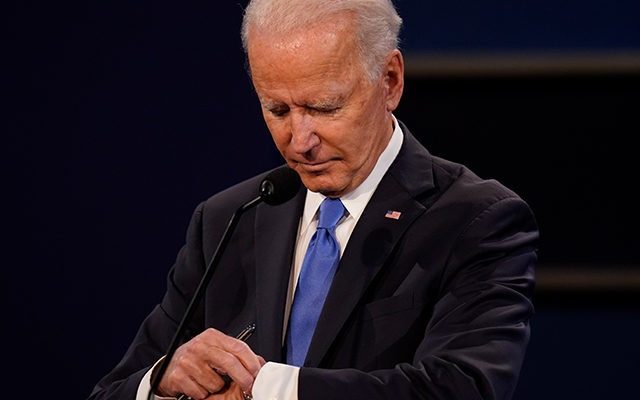 Joe Biden Checks His Watch Towards End of Debate

As the final presidential debate drew to a close on Thursday, Joe Biden was caught looking at his watch.

Moderator Kristen Welker brought up the topic of climate change and both candidates were in a split-screen when Biden looked at his left wrist.

During a debate in 1992, President George Bush looked at his watch and was criticized as being “out of touch” for checking the time:

John Dickerson argued Bill Clinton connected with a woman asking the candidates a question, while Bush “was caught in the background looking at his watch.”

Dickerson argued the moment “emphasized this pre-existing narrative” that he did not care.

He was probably worried the meds were getting ready to wear off. Or maybe he was just ready for bed. Either way he should not be a president.

He has to check the time cause he needs another shot of his anti lunatic medicine.

It all comes down to the simple fact that under Trump taxes are low, and under Biden, he admits this, taxes will skyrocket. The result of Biden getting in would be a 2021 recession. If you want to vote for that have at it.