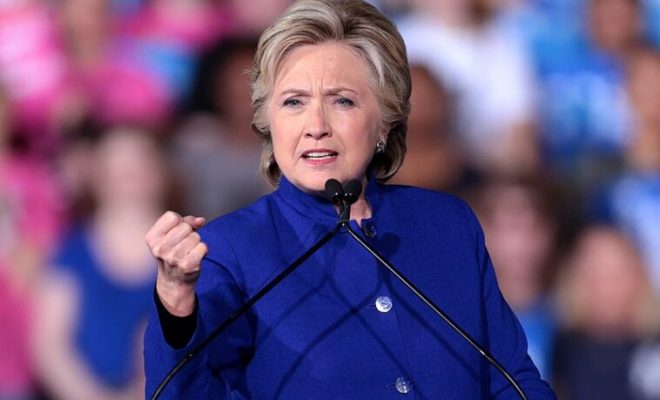 The first evidence of “Russian Collusion” has been found in Special Counsel John Durham’s investigation and it had nothing to do with former President Donald Trump and had everything to do with failed presidential candidate Hillary Clinton.

Check out what Breitbart reported:

Danchenko, a Russian-born, U.S.-based researcher, had worked from 2005-2010 at the Brookings Institution with Strobe Talbott, a former official from Bill Clinton’s State Department.

He later became the main “Russian” source for former British spy Christopher Steele, who compiled the fraudulent “Russia dossier” on Donald Trump on behalf of opposition research firm Fusion GPS, which was secretly being paid by the Hillary Clinton campaign and the Democratic National Committee.

The “dossier” was fed to the FBI and the press, and was used in FISA surveillance warrants on (innocent) Trump aide Carter Page. Through Page’s communications, the Clinton-friendly Obama administration had visibility into Trump’s campaign.

That much was known before Thursday. But the indictment revealed even more.

A figure identified as “PR Executive-1,” and later confirmed to be communications consultant (and Clinton apparatchik) Charles Dolan Jr., was working with Danchenko.

Dolan had the kind of Russian contacts that Trump’s enemies searched for, in vain, when they persecuted the 45th president. Had Special Counsel Robert Mueller found anything like these contacts near Trump, the hoax would have been vindicated.

The indictment notes that Dolan “spent much of his career interacting with Eurasian clients with a particular focus on Russia.” He had even handled “global public relations for the Russian government and a state-owned energy company.”

The story gets worse however because Dolan had close relationships with “senior Russian Federation leadership” including the press secretary and staff to President Vladimir Putin.

Dolan was also close with the Russian ambassador to the United States.

Dolan attended meetings at the Russian embassy in Washington, DC. He arranged meetings in Moscow at which Danchenko met with Russian officials and “sub-sources” who gave him information that later ended up in Steele’s sensational dossier.

Durham’s indictment filing tells the story of the infamous “pee tape” allegation, in which Trump was alleged to have hired prostitutes to urinate on a bed where President Barack Obama was to have slept during a visit to a Moscow hotel. In June 2016, the indictment alleges, Dolan and another associate, identified as “Organizer-1,” stayed at the same hotel, and were given a guided tour by the management.

Durham told the court: “According to Organizer-1, during the aforementioned tour of the Presidential Suite, a Moscow Hotel staff member told the participants, including PR Executive-1, that Trump had stayed in the Presidential Suite. According to both Organizer-1 and PR Executive-1, the staff member did not mention any sexual or salacious activity.”

The entire story of the prostitutes was therefore a fabrication — and Danchenko is now being charged for lying to the FBI about whether Dolan was a source for “Trump’s stay and alleged activity in the Moscow hotel.”

In October 2016, Dolan and Danchenko attended a conference in Moscow with “several Russian government officials.” The conference included meetings in the Kremlin itself.

Though the Clinton campaign supposedly did not know about Dolan’s activities (according to Dolan), one important “sub-source” believed that Dolan was an “advisor” to Hillary Clinton, whom he hoped would win. He expected to be taken to the State Department in the event that Hillary Clinton defeated Trump.

Dolan’s contacts with Russia went much further than a random meeting at Trump Tower — an arm’s-length contact that once fueled establishment media conspiracy theories.

Dolan was in direct contact with officials close to Vladimir Putin himself.

And at least some of his sources made clear that they wanted Hillary Clinton to win. One even asked for her autograph.

This was “Russia collusion” of the highest order, reinforcing the possibility that the Steele dossier was itself Russian disinformation.

The irony of it all is that Danchenko and Dolan were manufacturing evidence of Trump’s supposed “collusion” with Russia, while colluding with Russia themselves.

And it looks like Durham’s indictment is just the tip of the Arctic iceberg.

Trump-haters greeted every “Russia collusion” leak by declaring “the walls are closing in” or that it was “worse than Watergate.”

Well, now the walls really are closing in — on the Clintons’ world. And this really was worse than Watergate.