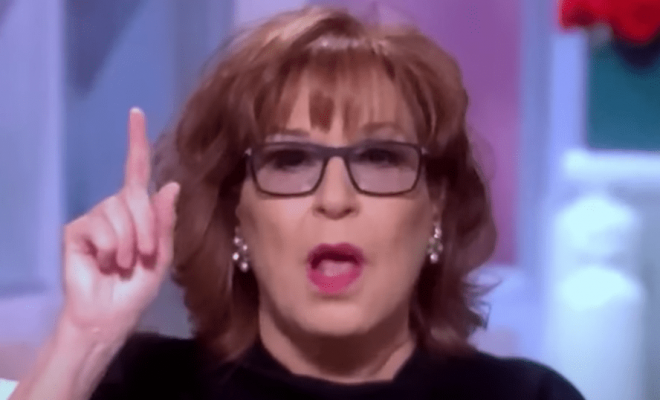 INCITEMENT: Joy Behar Says Tucker Carlson Needs To Be “Tied Up And Put In A Corner” [WATCH]

During their program Tuesday, the gals jumped on the ‘Hate Fox News’ bandwagon that is being pulled around by the questionably male Brian Stelter of CNN to bash the network’s top pundit, Tucker Carlson.

“You have Tucker Carlson on television last night saying that there was no evidence of white supremacists at the riot. Well, the evidence was clear at the riot, at the insurrection,” co-host Sunny Hostin, who sees white racism under every rock, said, in reference to a couple of Confederate flags that were displayed at the Jan. 6 Capitol riot and a black police officer who allegedly endured racial slurs. “I was disgusted by what Tucker Carlson said. How dare he say there was no evidence of white supremacy there? There was evidence everywhere.”

That led co-host Joy Behar to a gaslighting moment when she openly suggested something bad ought to happen to Carlson.

“Tucker Carlson needs to be, you know, tied up and put in the corner somewhere so we never hear from him again,” she said as she remained in ‘nasty leftist attack mode’ to go after Sen. Ron Johnson, R-Wis.

I have a couple of questions. It’s, like, there’s no logic to what he’s saying, Ron. Why would liberals disguise themselves as Trump supporters to protest an election they just won? And according to him, Nancy Pelosi planned death threats against herself and then she broke into her own office to pose for selfies,” Behar continued. “None of this makes sense. He’s making Marjorie Taylor Greene look normal, this guy.”

[Note to Joy: The freshman Republican Republican lawmaker from Georgia is a lot more ‘normal’ to tens of millions of Americans than you are.]

Later, Behar must have been struck by her blatant threat when she issued a mea culpa of sorts.

“I do not mean to imply that anything harmful should happen to Tucker Carlson,” she said. “I just want him to stop saying stupid things. That’s all. So let me just get that straight. I don’t want to be perceived as someone who is violent in any way. I’m not.”

[Note to Joy: Tens of millions of Americans think most things you say are stupid — but those same people will defend your right to say them because, you know, that Constitution of ours, and stuff.]

Let’s go to the fact-check on what led this segment.

Hostin suggested that ‘white supremacy was evvvverywhere‘ during the Capitol riots. But was she there?

No, she wasn’t. However, a guy who is trained to notice such things was there and he said no such evidence existed.

Instead, J. Michael Waller, the senior analyst for strategy at the Center for Security Policy who specializes in propaganda, political warfare, psychological warfare, and subversion and has taught at the Naval Postgraduate School lectures at the John F Kennedy Special Warfare Center and School at Ft. Bragg saw four types of people in Washington at and near the Capitol that day:

From a guy who is trained to spot such things.

There are people who take the perpetually angry, left-wing ladies of the view seriously, hence it’s disturbing when they call for people to be ‘tied up’ and never heard from again.

But as demonstrated here, no one should.

Now that shoe fits on the other foot

That Joy Befart doesn’t know when to keep her my shut. She should be put in a corner with hat on her that say’s DUNCE.

Joy wants him tied up so she can go down on him! She a crazy redhead and knows nothing about politics or the truth! Just a brain washed big mouth demorat who’s over paid to sit there and run that thing under her big nose!! I would bet shes a CNN and MSNBC watcher! Demorats cant handle the truth or facts!