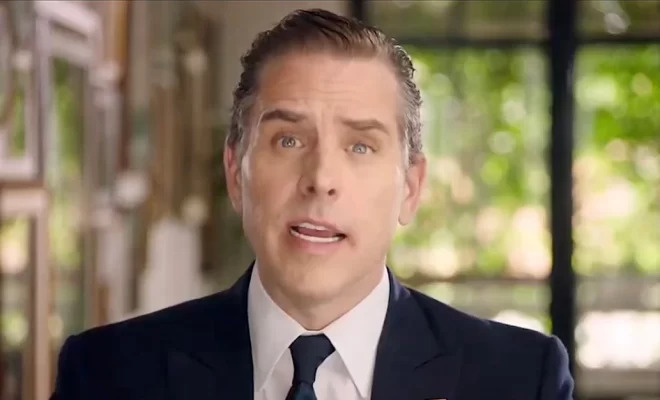 Hunter Biden, the son of President Joe Biden, was paid handsomely, to the tune of $10 million annually and an $80,000 diamond ring, to help spread Chinese influence in the United States, a new report has claimed.

New York Post columnist Miranda Devine details in her new book titled “Laptop from Hell,” the alleged dirty business dealings between Hunter Biden and a Chinese energy company named CEFC, the author said in a piece for The Post.

James Gilliar, a wiry, 56-year-old British ex-SAS officer, got to know Ye Jianming, the 40-year-old chairman of CEFC, when they were both working in the Czech Republic.about:blank

CEFC was a Chinese conglomerate, one of the largest energy companies in the world.

Ye’s task at was to spend $1.5 billion as quickly as possible to ensure the Czech Republic would become China’s “Gateway to the European Union,” a priority of President Xi.

To that end, Ye bought everything from a football team and a brewery to an airline, before being named “special economic advisor” to Czech President Milos Zeman.

Now he was looking for an influential partner to help with acquisitions in other locations around the world that had strategic significance for the Chinese state.

Gilliar had an idea who could help: The Biden family.

“Hunter was great,” Gilliar said to Walker in a 2015 email. “True sheikh of Washington.”

Weeks after that he emailed Hunter directly and said, “It has been made clear to me that CEFC wish to engage in further business relations with our group.”

Apparently, Hunter knew that CEFC was the capitalist arm of President Xi Jinping’s Belt and Road Initiative whose mission it was to spread Chinese influence worldwide.

The author said that Gillar told Tony Bobulinski, a Biden whistleblower, that he required some help restructuring a joint venture with the Chinese and “one of the most prominent families in the United States.”

In a WhatsApp message to Bobulinski, Gillar said that the plan was to “build an investment firm like Goldman Sachs.”

Later on, Gillar revealed that it was for the Biden family and he assured them that Biden was not going to campaign for president in 2016 and that after he left the White House he would become actively involved. And he said that the Biden family expected to have billions of dollars in projects come through the company.

He then went on to say he wanted to introduce him to his partner.

“Who is your partner?” asks Bobulinski.

Bobulinski is leery. “I understand you want me to . . . help drive things in the US, but Hunter is [already] here.”

Gilliar: “Money there, intent there . . . skill sets missing . . . We need to create the best deal platform in history, and they haven’t got a clue.” Bobulinski doesn’t like the fact Hunter “was kicked out of US Navy for cocaine use.”

“But he’s super smart,” says Gilliar. “Just a lot of under achievers around them using their name. Has a few demons but u are used to those, right?”

Bobulinski asks: “Is he the decision maker or the Chinese?”

Later, Bobulinski asks: “Ok who is putting up the $10MM [million]?”

Gilliar: “Joint vehicle — half us and then equally split — money is already in. Discuss more face to face.”

In an interview with The New Yorker Hunter said he went to Miami to meet Ye for “charitable purposes” and was stunned when he was given an $80,000 diamond as a gift.

Nine days after Hunter’s meeting in Miami with Ye, $3 million is wired into an account for Rob Walker’s company, Robinson Walker LLC, from State Energy HK Limited, a Shanghai-based company linked to CEFC, according to the Chuck Grassley-Ron Johnson inquiry.

On March 1, another $3 million is wired to Robinson Walker by the same company. Both transactions are flagged by the Department of Treasury’s Financial Crimes Enforcement network in a “suspicious activity report,” filed with the Senate committees as “Confidential Document 16.”

Did you see this? Add butter to your coffee: Boost metabolism + burn stomach fat

Related Items
USA First Reporting
← Previous Story Report: The Fully Vaccinated Account for 81% of the COVID Deaths in the UK
Next Story → United Nations To Give Illegal Migrant Families In Mexico $800 A Month As They Head To USA