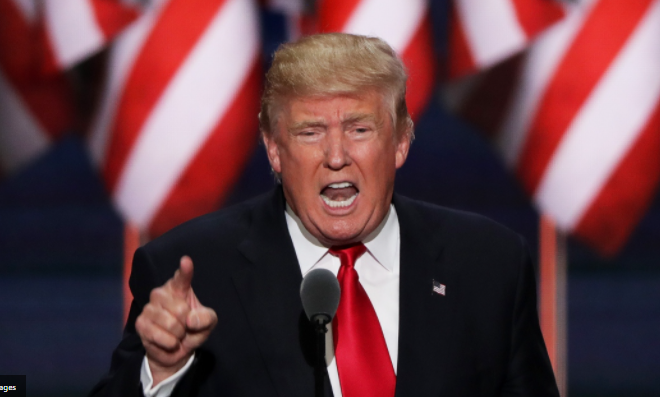 ‘How Stupid Our Country Has Become’: Trump Unleashes on Biden

Former President Donald Trump ripped into his successor on Saturday, opining that the country has gone downhill quickly since Joe Biden defeated him last year and took office in January.

Trump made his remarks as multiple crises envelop the Biden administration and the president personally, including the chaos along the U.S.-Mexico border, the ongoing supply chain problems, and inflation marked especially by rising food and gasoline prices.

“Our Country is being poisoned with the millions of people that are illegally flowing through our Borders, in most cases not even questioned or stopped,” he said in a statement posted to his Save America website. “Many are criminals from the emptied prisons of other countries, most of these are very dangerous people.”about:blank

He went on to say that the country “is dying from within and nobody is doing anything to stop it.”

“The first thing that should be done, and it can be done quickly, is FINISH THE WALL,” he continued. “A deal must be made with Mexico, where Mexico serves as a 2,000 mile barrier, not a launching pad for the illegals that are coming in.”

Trump’s angst over the cessation of border wall construction, a signature immigration enforcement accomplishment during his term, comes as reports note that the Department of Homeland Security has contracted to have a wall built around Biden’s vacation home near a Delaware beach.

It also comes as DHS announced a record number of migrants have crossed illegally into the U.S. this year alone.

Single adults represented the largest group of those detained in the fiscal year that ended Sept. 30, at 1.1 million, or 64 percent of all crossers. There were also large numbers of migrant families — more than 479,000, which is about 48,000 fewer than during the last surge in family crossings in 2019.

“What we are seeing at the southern border is a crisis,” Mike Pompeo, a former secretary of state under Trump, noted on Twitter Friday. “If the Biden Administration would’ve kept the policies we had in place, this would have never happened.”

In addition, Trump’s comments followed an announcement last week by attorneys general in Missouri and Texas to compel the Biden administration to use funds passed by Congress for wall construction be used to finish the job.

Trump then turned his ire towards Biden’s deadly, tragic withdrawal from Afghanistan.

The former president also drilled down on those fleeing Afghanistan and coming to the United States.

He said “97 percent of the people that came in from Afghanistan rushed the planes and should not be here.”

“Those people must be checked very carefully because many of them will turn out to be strongly related to high-level terrorism,” he charged, adding, “how stupid our Country has become.”

“So sad to watch when just 10 months ago we had none of these problems, and none either with bad economy, inflation, fuel prices going through the roof, and so much else,” he wrote.

“And never forget, because the Fake News will not talk about it any longer, those needlessly killed in Afghanistan and the thousands of people and the $85 Billion worth of Military equipment left behind in the complete and total surrender by the United States of America,” the former president wrote.

Trump has frequently teased a 2024 run but many of his supporters and surrogates have said he is waiting to see how the GOP performs during the 2022 elections before he announces any decision.