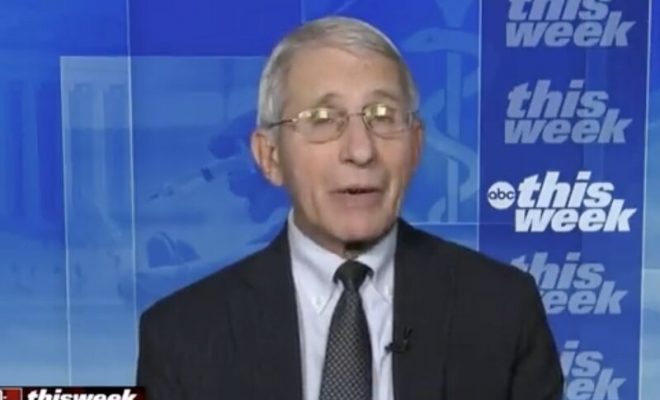 On Sunday, left-wing radical Doctor Fauci opened the door for a lifetime of Covid booster shots.

So much for the vaccine providing “lifelong protection” like we were promised.

“Pfizer CEO Albert Bourla recently said there’s a high chance boosters would be needed annually. Do you think that’s a possibility or do you believe it might be even sooner, like every six months?,” asked far-left anchor Martha Raddatz.

LEAKED: Biden To Abolish 401(k) Benefits (Forbes Study), did you see this?

“You know, we follow the data about how often you would need it. We would hope, and this is something that we’re looking at very carefully, that that third shot with the mRNA not only boosts you way up, but increases the durability so that you will not necessarily need it every six months or a year. We’re hoping it pushes it out more. If it doesn’t, and the data show we do need it more often, then we’ll do it, but you want to make sure you get the population optimally protected and you do whatever you need to do to make sure you do that,” responded Fauci.

In another interview, Fauci moved the goal posts once again, saying that Biden is open to CHANGING the definition of “fully vaccinated”. Yes, really.

While being interviewed on the propaganda-laden CNN, Dana Bash asked, “You said hospitalizations for people who had only two doses are already picking up. Is that the definition of what constitutes fully vaccinated, does it need to change now to include a booster shot?”