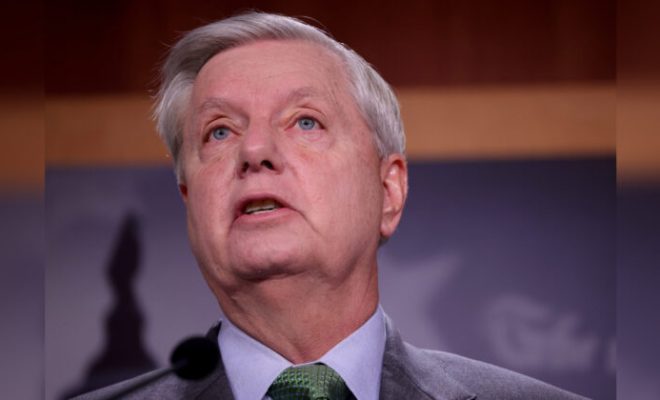 Graham published his letter to U.S. National Institute of Allergy and Infectious Diseases (NIAID) director Fauci on Twitter, saying that he hopes Biden’s chief medical adviser will travel to the Southern border to survey what many consider to be a public health crisis related to the surge of migration from Central America.

“Is the Biden Administration undermining the work to stop the spread of COVID-19 with the current policies and procedures in place? I think so, but you [Dr. Fauci] are the expert,” Graham said in his letter.

It comes as the United States faces a surge in illegal border crossings in recent weeks. More than 100,000 apprehensions of illegal crossers were made in February—President Joe Biden’s first month in office—and another 26,000 people evaded capture, according to internal data reviewed by The Epoch Times.

While the Biden administration has said that the border isn’t open, Biden reversed or altered a number of key Trump-era provisions, which contributed to the surge, experts have told The Epoch Times.

Graham in his letter noted that as many as one in 10 migrants crossing the border have tested positive for COVID-19, the disease caused by the CCP (Chinese Communist Party) virus, and that some of the Customs and Border Protection facilities where they are housed are “sometimes 800-900 percent over capacity.”

“Given the dire overcrowding situation, the Biden administration has decided to quickly release migrants from these facilities. In many cases, the American taxpayer is paying to transport them thousands of miles from the U.S.-Mexico border,” Graham wrote.

The Republican senator said that be believes the “current setup” and procedures being used by the Biden administration are “creating a COVID super-spreader” event.

“However, your expert opinion could confirm or alleviate these concerns,” Graham wrote, adding that if his concerns are valid, “we need to find ways to stop it.”

“Let’s make sure the policies and procedures at the U.S.-Mexico border are protecting Americans from the spread of COVID-19, not accelerating its spread,” he concluded.

Graham’s letter comes just days after Fauci said that he’s too busy to visit the border, in response to growing Republican criticism that he has been silent on the matter.

When asked by Cavuto about whether he believes there could be a super-spreader event at the border, Fauci said that “it is a very difficult situation,” and that he believes the Biden administration is doing its best to alleviate the problem.

“Having me down at the border—that’s really not what I do,” Fauci responded. “I develop vaccines, I develop countermeasures. I mean, having me at the border, I don’t know why they’re saying I should be at the border.”

People crossing the southern border “are tested to the extent possible,” Fauci told Cavuto. “If they’re positive, they’re quarantined. That’s what I know about it. No one is denying that it’s not a difficult problem at the border.”

Sens. Chuck Grassley (R-Iowa), the ranking member of the Senate Judiciary Committee, and John Cornyn (R-Texas), the top Republican on the Senate Immigration Subcommittee, have called for Democrats to hold a public hearing on the border crisis and question Homeland Security Secretary Alejandro Mayorkas.