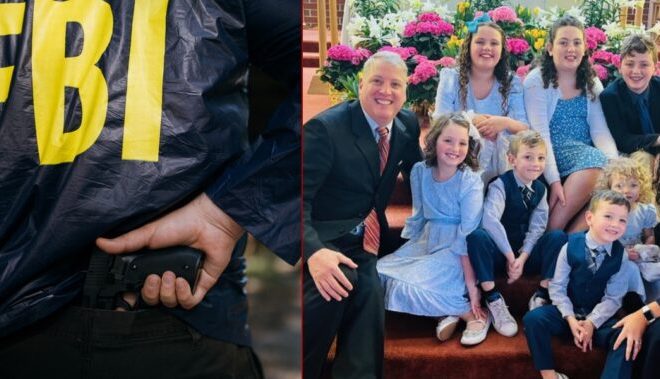 A fully armed FBI SWAT team was dispatched to a Pennsylvania evangelist’s home on Friday and terrorized his family for sermonizing pro-life messages and spreading the Christian gospel.

The FBI raid was the latest example of the Biden administration’s targeting of political adversaries and policy critics. It was conducted in connection with a purported “FACE Act” violation, which is a law that allegedly protects the Freedom of Access to Clinical Entrances, typically for women to receive abortions.

The FBI raid targeted Mark Houck, who is the founder and president of The King’s Men. The Christian group promotes “healing for victims of pornography addiction” and “promotes Christian virtues among men in the United States and Europe.”

According to his wife Ryan-Marie, who spoke with LifeSiteNews, every Wednesday Houck drives two hours south to Philadelphia and councils on the sidewalk for six to eight hours at two different abortion centers.

Ryan-Marie, a homeschool mother, explained that “the SWAT team of 25 to 30 FBI agents” swarmed their property with “around 15 vehicles at 7:05 a.m.” on Fridau morning. After surrounding the house with rifles in firing position, “they started pounding on the door and yelling for us to open it.”

Before opening the door, her husband tried to calm his wife and small children, saying, “‘Please, I’m going to open the door, but, please, my children are in the home. I have seven babies in the house.’ But they just kept pounding and screaming,” she said.

When Mark opened the door, “'[he FBI] had big, huge rifles pointed at Mark and pointed at me and kind of pointed throughout the house,” Ryan-Marie described.

When they came in, the FBI agents ordered the kids to stay upstairs. “Our staircase is open, so [the kids] were all at the top of the stairs which faces the front door, and I was on the stairs as well, coming down.”

“The kids were all just screaming. It was all just very scary and traumatic,” she added.

The FBI agents told the Houcks they were there to arrest Mark. When Ryan-Marie asked to see the warrant, “they said that they were going to take him whether they had a warrant or not.”

The agents nonetheless agreed to get the warrant for her from one of their vehicles, and proceeded to arrest Mark Houck.

The FBI agents provided the first page of the warrant and said they were taking him to “the federal building in downtown Philadelphia.”

“After they had taken Mark, and the kids were all screaming that he was their best friend, the [FBI agents on her porch] kind of softened a bit. I think they realized what was happening. Or maybe they actually looked at the warrant,” Ryan-Marie explained. “They looked pretty ashamed at what had just happened.”

The warrant charged Mark with violating the Freedom of Access to Clinic Entrances Act, due to a claimed “ATTACK OF A PATIENT ESCORT.”

Critically, Ryan-Marie stated this charge comes from an incident that had already been thrown out of the District Court in Philadelphia, but was somehow picked up by Merrick Garland’s politicized Department of Justice.

Doug Mastriano, who is running for Pennsylvania governor, released a statement blasting the FBI raid.

“The continued weaponization of the FBI and persecution of Joe Biden’s DOJ against ordinary Americans is an outrage,” Mastriano said.

“This morning, a heavily armed SWAT team of dozens of FBI agents raided the home of Mark Houck of Bucks County, Pennsylvania, with his wide and terrified children inside over a case that was long thrown out by the District Court in Philadelphia,” he continued.

“Citizens across the Commonwealth of Pennsylvania join me in expressing our outrage at this early-morning raid executed on a young family,” he added. “This show of force carried out by the Biden regime against ordinary Americans is an abuse of power that stands against the fundamental principles on which our country was founded.”

“As Governor, I will not allow the police state of Joe Biden to enforce his persecution against his political enemies on sacred Pennsylvania soil,” he closed. “Not on my watch.”

Related Items
USA First Reporting
← Previous Story Former Trump Lawyer Finds ‘Huge Revelation’ on Page 6 of 11th Circuit Decision
Next Story → Trump Speaks The TRUTH, Declares What Must Be Done To Save The Country From The RADICAL Left