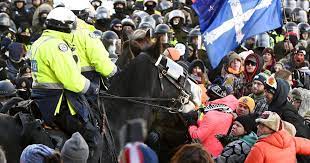 Is this the oath that Ottowa Police officers took?

Ottawa police officers are back at it today after video footage from yesterday in Ottawa, Ontario, shows a frightening moment as police, wearing yellow jackets and riding on horseback, surged through a crowd of protesters gathered outside the Capitol.

The video posted to social media shows what appears to be a line of police standing on one side and a line of protesters on the other. The mounted units began to move through the crowd, making contact with some of the protestors. The footage shows an elderly woman in a red jacket that appears to be in a mobility scooter and a man in a brown coat who were both knocked to the ground by the mounted police and appear to be trampled.

VOTE NOW: Could Trump Recover the Country After the Biden Disaster?

In the video taken by a cellphone, someone can be heard saying, “They just trampled this lady—They just fully trampled that lady!”

Ottawa police released a statement on Twitter assuring the public that authorities are unaware of any injuries.

“We hear your concern for people on the ground after the horses dispersed a crowd. Anyone who fell got up and walked away. We’re unaware of any injuries. A bicycle was thrown at the horse further down the line and caused the horse to trip. The horse was uninjured,” police said.

Here is just one response to the statement tweeted by the Ottawa Police:

Here is the alleged bicycle throw. Decide for yourself.

Marie Oakes tweed this morning that it appears the horses are making a return appearance today:

After trampling protesters with horses yesterday, the police are once again bringing out horses in Ottawa.