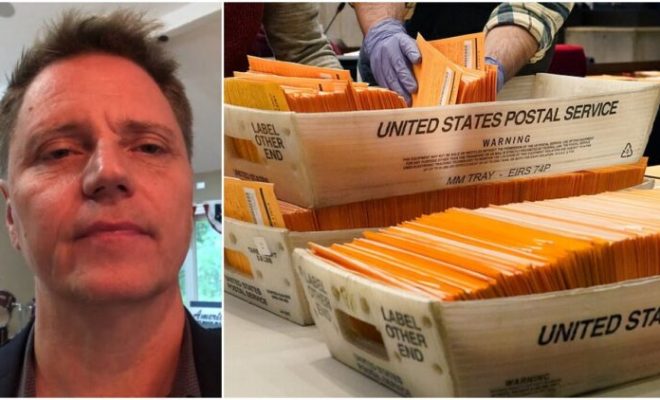 GOUSA founder John Paul Moran ran for U.S. Congress in the state of Massachusetts in 2020 and does not want his state or other states believed to be solidly blue to get a free pass on voter integrity issues.

Moran appeared on Big League Politics Live where he explained how an avalanche of mail-in ballots and other cheating mechanisms caused the 2020 election to be dubious in his state.

“Now they said, everybody in the state, they mailed out millions of millions of ballots, and we guess that 500,000 to one million ballots went out to bad addresses,” Moran added, also noting that signature checks were disregarded during the election.

Moran also brought up the infamous Zuckerbucks, in which Big Tech bought crucial election infrastructure, that were used to influence the results in Massachusetts.

“400 million dollars, getting drop boxes in these dark-of-night places where they were all Democrat-heavy districts, none where Republicans were at, it was an absolute steal,” he said, noting that Facebook CEO Mark Zuckerberg pumped more money into the state of Massachusetts than any other state last year.

Moran is currently fighting back in the courts against violations of election law allegedly perpetrated by Democrats. What Moran is describing is similar to the Democrats’ fraud blueprint that occurred in key battleground states, such as Michigan, on election night.

Big League Politics reported on how tens of thousands of mail-in ballots appeared at 3:30 am on election night without any accountability or chain of custody to swing the vote in Biden’s favor in the corrupt city of Detroit:

“One day after the election, the results are still pending and will likely depend on the rust belt. President Donald Trump holds a strong lead in the state of Michigan, but the city of Detroit and their mail-in and absentee ballots have yet to be officially tallied.

In news that will likely cast further doubt on the election results, tens of thousands of absentee ballots arrived in large U.S. Postal Service boxes at the TCF Center in Detroit, Mich. on Wednesday morning at 3:30 am. The TCF Center, formerly Cobo Hall, is where the absentee ballots are counted for Wayne County, which is the home of Detroit…

Before the ballots showed up mysteriously at 3:30 am, no ballots had arrived at the TCF Center for over six hours, and many poll workers in the facility sat around with no work to do while getting paid hundreds of dollars by the state of Michigan.

According to Michigan election law, all of these mail-in and absentee ballots had to be submitted before 8pm on Tuesday night in order to be lawfully accepted and counted for the election. This means the city of Detroit potentially sat on these ballots for hours. The white van that arrived had the name of Detroit city clerk Janice Winfrey emblazoned upon it as well as a logo and a phone number. Last month, Winfrey set the stage to drag out the process in an interview with ABC 7 News.

“We’re back in control, and we know that we will have nearly 10,000 poll workers that will be working with us to process ballots on election day, or election week is what we’re calling it now, because we know we’re going to be slow,” she said, adding that she was not going to let “outside influencers” get in the way of her election day schemes.”

Regardless of the fraud, Moran is looking to the future through his GOUSA organization. He has an event, “Christmas: Uncancelled”, which is scheduled to take place on Saturday, Dec. 4.

Speakers scheduled for the event include Trump-endorsed governor candidate Geoff Diehl, Jacob Wells from GiveSendGo, Marcy Wells McCauley from ROAR, and others. Tickets are available here. The official website for GOUSA is https://go-usa.us/.