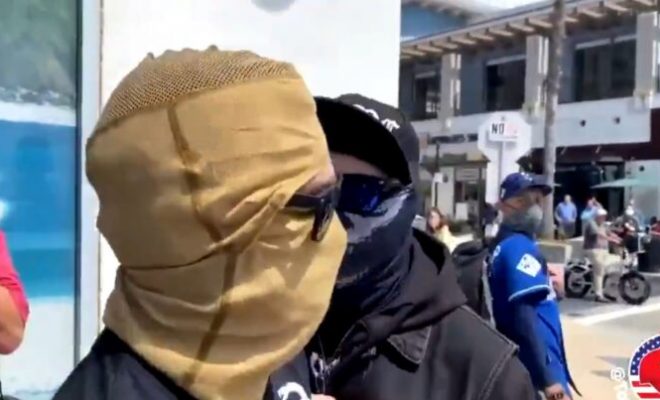 Huntington Beach, California became the site of a tense confrontation between a handful of protesters attending an April 11th “White Lives Matter” and over a hundred reported Antifa and Black Lives Matter counter-protesters who showed up expecting the actual Ku Klux Klan.

Despite being largely outnumbered by Antifa and BLM activists, the police were forced to intervene and haul away Trump supporters and purported ‘white nationalists’ in an SUV. The Orange County Register reported that there were about 500 total protesters in attendance at the peak of the dueling rallies.

“Around 1:30 p.m., a group of several dozen protesters began arriving in the area. They did not carry signs or chant, but many of them began confronting the Black Lives Matter demonstrators,” the Orange County Register reported.

“The newly arriving demonstrators, who mainly came in pairs or small groups, quickly confronted protesters who had set up on the north side of PCH,” the OCR went on. “Some were clad in dark t-shirts with an American flag, others in Trump gear. Arguments, and violence, quickly ensued.”

“Shortly after 2:30 p.m., police declared an unlawful assembly at the nearby 5th Street and Walnut Avenue intersection in an attempt to disperse what law enforcement officials described as an unruly crowd,” the OCR continued.

The Daily Mail further reported that the police intervened and took away the Trump supporters. One could visibly see Trump and ‘Don’t Tread on Me’ flags in the crowd.

Here is video of the man with the Trump flag being forcibly put in a police cruiser:

“The Orange County Register reported that a man and a teenager who waved the flags were chased around an intersection by protesters – and then were surrounded,” the Daily Mail noted. “Police rode into the crowd on horseback to scoop up the men and took them away in an SUV.”

A man in an Army cowl ran through the BLM-Antifa crowd shouting “white lives matter” and “this is America.” This drew a dangerous standoff between Antifa and the man, which was stopped by police.

Tomas Morales told Becker News that the above incident occurred at about 2 p.m. He provided further context on the person of interest, including a quote that highly suggests that his presence may have been a plant.

“PRIOR TO THE VIDEO ABOVE: The green army cowl guy said “The White Race are the real n****rs of this land,” Morales reports. “The crowd chased him until the above video happened.”

You can hear the man in the Army cowl say the line clearly in the video above.

The rally was later declared an “unlawful assembly” and was promptly shut down.

Police helicopters arrived on the scene. There is an aerial view of members of the crowd clashing.

Police arrested at least two counter-protesters. One was reported to be a member of Antifa and the other was described as a Black male. The Black male was reportedly arrested for using amplified sound without a permit.

The social media activity underscores that there appear to be far more counter-protesters than actual “White Lives Matter” supporters.

This is an example of a so-called KKK rally attendee, according to one observer.

This appears to be a more accurate version of events.

The counter-protest event was organized in suspicious fashion, acccording to reports made available at the Daily Mail. A ‘Day of Unity’ had been scheduled at the same time as the White Lives Matter rally.

“The rallies around the country had been organized by ultra-right wing groups that had called for April 11 to be a national day of ‘White Lives Matter’,” the Daily Mail reported. “Investigators have not been successful in determining who exactly organized the events, which were advertised via social media.”

The mysterious appearance of KKK propaganda followed by no actual Klan members further underscores the strong plausibility that the counter-protest may have been astroturfed to frame the left’s political opponents and make it appear there were more racists in the community than there actually are.

“The rally also comes after fliers with KKK propaganda were delivered to homes in Huntington Beach, Newport Beach and Long Beach, according to the LA Times,” the Daily Mail said. “However, police do not believe that the same people are responsible for the fliers and the rally.”

The report from the Daily Mail, as well as corroborating reporting from the LA Times, only concretely identify relatively few possible right-wing extremists attending White Lives Matter rallies across the country.

One man in a black mask pulled a ‘Nazi salute’ near Trump Tower; but due to mask mandates, we cannot know if such actors are sincere activists or political plants, unless those actors are arrested and identified.

The irony of the Huntington Beach rally being declared an “unlawful assembly” is that Black Lives Matter and Antifa have been allowed free reign throughout the entire pandemic to wreak havoc on communities. The radical leftists have incited violence, caused mayhem, committed arson, and run wild without serious police pushback.

Several dozen purported ‘white nationalists’ and some Trump supporters show up with a message that doesn’t fit the prevailing culture and it is almost immediately shut down as “unlawful assembly.”

Why didn’t the American people see this at BLM & Antifa riots all last year? The double standard is ludicrous.

The left will love this and call it what they want.