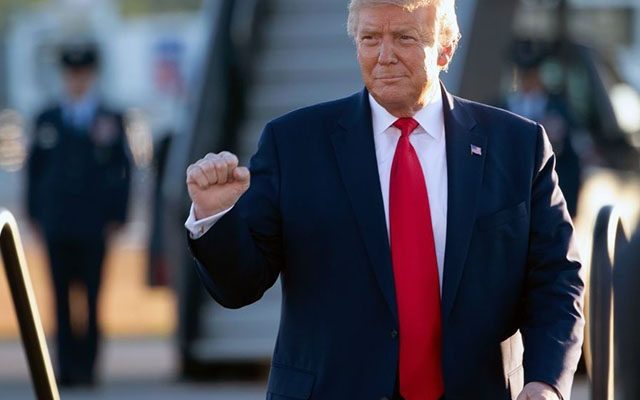 The former president, Hagerty says, is “energized and engaged.”

Hagerty was nominated to serve as the U.S. Ambassador to Japan by the former president in 2017, and served in that role from his Senate confirmation in 2017 until 2019. He was elected to the United States Senate from Tennessee in November, more than a year after the former president endorsed him for that job.

“As the only former Trump Administration official in federal office, the 45th President and I believe it is important that we stay in regular contact to ensure America remains strong,” Hagerty told Breitbart News in an exclusive statement.

“President Trump’s policies made America the fastest growing economy in the world, renewed our military strength, and, through Operation Warp Speed, positioned our nation to recover from the global pandemic far faster than otherwise would have been the case,” Hagerty continued.

“This week, I enjoyed visiting with President Trump at Mar-a-Lago, where we discussed a range of topics, including the border crisis, election integrity, the state of the Republican Party, and the 2022 elections. President Trump is engaged and energized, and remains focused on fighting for the forgotten men and women all across the country,” Hagerty concluded.

MUST READ! This Secret Plan Could Destroy the US Dollar

As Breitbart News has reported, Hagerty has been a major voice in the U.S. Senate opposing unfair trade practices and threats of military aggression from the Chinese Communist Party:

Sen. Bill Hagerty (R-TN) told Breitbart News exclusively that the Chinese Communist Party is “singing all the way to the bank” thanks to President Joe Biden’s various policies in his first two weeks in office.

Hagerty, in an exclusive interview on Breitbart News Saturday on SiriusXM 125 the Patriot Channel, said that Biden’s orders closing down the Keystone XL pipeline and shutting down leases for drilling on federal lands embolden China and undermine the United States.

“Broadly look at what the Biden Administration is doing on energy,” Hagerty said. “By canceling the Keystone XL pipeline, Biden is giving a huge gift to China. Look at what it did to Canada. If Canada can’t move their oil through the XL pipeline, they’re going to sell it to China. Well, guess what? China now has a huge store of oil headed its way courtesy of the Biden administration. And this Paris Climate Accord that they want to get back into? That’s going to put an immediate burden on the U.S. economy. China is not going to have to comply anywhere in the near term. Theirs was the only economy that grew last year. Ours didn’t. They’re going to put more burden on us while China is singing all the way to the bank thanks to the Biden administration. So we have some real reasons to be concerned.”

Hagerty has also been a vehement critic of President Biden’s open border policy, as he told host Alex Marlow on SiriusXM’s Breitbart News Daily in March:

Americans are dying of overdoses of illicit drugs laced with China-sourced fentanyl, Hagerty stated.
“China is pumping this fentanyl into Mexico … where it’s manufactured and used as a component of drugs that are that are coming in and killing our kids in Tennessee.” . .

Hagerty added, “Why did [the Biden administration] remove the Stay in Mexico policy — the Migrant Protection Protocol — that had a dramatic impact of keeping the people that were seeking asylum south of the border? The Mexican government was even protecting the border. Now, they went straight to catch and release.”

“They opened the door and it’s a floodgate, right now,” he continued, “It’s been an open invitation, and when you offer stimulus checks to illegal immigrants, what sort of incentive is that? It’s all the wrong incentives, and that’s why they’ve got a crisis of their own making on their hands, and it’s really threatening the safety and security of states like mine.”