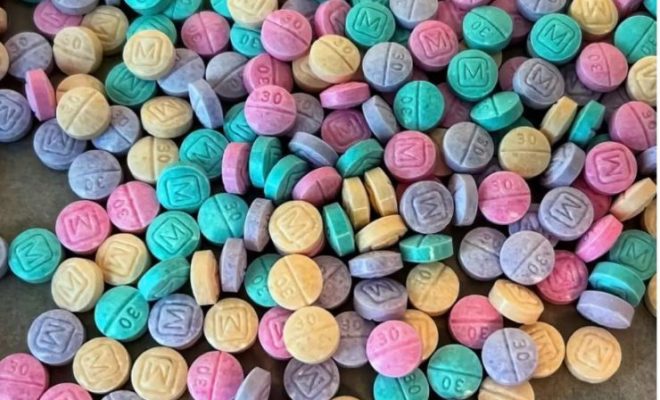 WARNING: A disturbing new trend, rainbow-colored fentanyl pills, are coming across the international border. DEA officials fear the rainbow tablets are a direct attempt by drug cartels to drive up addiction in kids and young adults.

We were willing to shut down the entire economy in the United States over 300 deaths a day from Covid. Every day 300 deaths are reported due to “overdoses.” Now young children are the latest target, yet what has this administration done about it?

“It’s not being stopped. Three hundred overdoses, this is being designed to target children. Drug cartels in Mexico want to kill American kids. What is this president doing about it?”

The Drug Enforcement Administration (DEA) is warning the public of an alarming new trend of colorful Fentanylyl made to look like candy and has become available across the United States.

The “rainbow fentanyl” trend appears to be a new method drug cartels use to sell highly addictive and potentially deadly Fentanylyl made to look like candy to children and young people.

“It’s not being stopped. Three hundred overdoses, this is being designed to target children. Drug cartels in Mexico want to kill American kids. What is this president doing about it?”

Save up to 66% on MyPillow products.

Doocy asked about the president’s response to the discovery of rainbow fentanyl, a drug targeted toward children, in 18 states. Jean-Pierre said the Biden administration has taken several steps to prevent drug overdoses, naming the Department of Homeland Security’s (DHS) initiative announced Wednesday to put $80 million towards drug prevention.

“But 300 overdoses a day now, we know how the fentanyl’s coming into the country, it’s coming right across the southern border.  The DEA [Drug Enforcement Administration] administrator says so. So, when is the president going to do something in order to stop it?”

The opioid crisis has come to the forefront of the drug conversation during the Biden administration. Yet, very little is covered in the media over the newest reason morgues are being overwhelmed, and now the most recent threat is to our young children.

Over the past two decades, nearly one million people have died of drug overdose deaths.

A growing majority of recent deaths have involved dangerous synthetic opioids like Fentanylyl.

Fentanyl is the deadliest drug threat we face today. It doesn’t matter what color, shape, or form it comes in; just two milligrams of fentanyl – the equivalent of 10 to 15 grains of salt – is enough to kill someone.

Fentanyl is a powerful opioid that Belgian chemist Paul Janssen First synthesized as a painkiller in 1960. It proved to be a valuable drug to help patients with traumatic injuries. Fentanyl is a synthetic opioid 80 to 100 times more powerful than morphine and 30 to 50 times more potent than heroin. A 3-milligram dose of Fentanyl—a few grains of the substance—is enough to kill an average adult male.

Chemicals used to make Fentanyl are almost entirely sold to Mexican drug cartels from China. The cartels then package Fentanyl into other drugs like Xanax and Adderall and ship them to the U.S. to be sold on the black market. Consequently, most Americans who die of fentanyl-related overdose deaths aren’t even aware they’re consuming it.

The DEA says that the new brightly-colored Fentanyl – which can come in pills, powder, and blocks that look like sidewalk chalk – is not more potent than the traditional form but could be more attractive to young people.

Opioid abuse affects communities across the nation. Provisional data from the Centers for Disease Control and Prevention (CDC) indicate that there were more than 107,000 fatal drug overdoses in the United States in 2021, an increase of nearly 15% from the previous year. Synthetic opioids (primarily Fentanyl) accounted for more than three-quarters of these deaths – 71,238 of the record fatal overdoses last year. Fentanyl seizures have spiked by 323 percent in San Diego in the previous three years, where Border Patrol seized 5,091 pounds in the first nine months of FY 2022, the Justice Department reported earlier in August.

In addition, drug overdose continues to be the leading cause of injury or death in the United States.

For two days in a row, officers busted someone with “rainbow fentanyl” at the Nogales Port of Entry.

He says this new “trend” could be a way of targeting America’s youth.

“Deputies are particularly concerned about rainbow fentanyl getting into the hands of young adults or children, who mistake the drug for something else, such as candy or a toy, or those who may be willing to try the drug due to its playful coloring,” reads a statement issued by the Multnomah County Sheriff’s Office in Oregon, after officers there found 800 fentanyl pills and four grams of multi-color powdered Fentanyl.

Mother of fentanyl victim delivers dire warning to families: ‘This does not discriminate.’

Mexico is the dominant source of illegal Fentanylyl in the U.S.: Report:

Chemicals used to make Fentanyl are almost entirely sold to Mexican drug cartels from China. The cartels then package Fentanyl into other drugs like Xanax and Adderall and ship them to the U.S. to be sold on the black market. Consequently, most Americans who die of fentanyl-related overdose deaths aren’t even aware they’re consuming it.

A recent report by the bipartisan Commission on Combating Synthetic Opioid Trafficking said the source of Fentanyl in the U.S. has evolved from 2014-2019 when most Fentanyl came in from China via international mail.

Now, Mexico is the chief source of Fentanyl coming into the United States — with most of the deadly drug coming in through the southern border.

“The drug is manufactured in illegal laboratories there using precursors from Asia – mainly the [People’s Republic of China] – and is trafficked principally by land into the United States from Mexico via the land border.

Early on, Republican lawmakers have urged Biden to take “decisive action” on the fentanyl crisis — noting a significant increase in the amount of the deadly drug seized at the southern border and expressing “deep concern” over what they say is inaction by the administration.

Rep Kevin McCarthy posted about the Fentanyl problem in 2021:

1,053 pounds of Fentanyl was seized at the southwest border in June – more than the last 3 Junes COMBINED.

Talk With Your Children – Education is Critical

It is highly unlikely that the U.S. can stop Fentanyl completely from coming into the country. Unfortunately, it does not seem likely Biden will regain control of our border anytime soon.

Therefore it is crucial children are educated on this potentially deadly situation. People need to talk to their kids, telling them not to try anything. They need to scrutinize the social media activity and texts of their children under 18. There have been reports of obtaining Fentanyl laced drugs from Snapchat. They need to be educated so that anything, even antidepressants, can be laced.

WATCH: Parents of teen overdose victim make a plea to all parents: Be wary of kids’ social media activity –

“Fentanyl is commonly disguised in fake prescription pills. If you find or come in contact with pills not dispersed by a licensed pharmacist, assume they are fake and potentially lethal. Fake pills are indistinguishable from real pills.”

Again, it is essential to educate children that the cartels package Fentanyl into other drugs like Xanax and Adderall and ship them to the U.S. to be sold on the black market. Consequently, most Americans who die of fentanyl-related overdose deaths aren’t even aware they’re consuming it.

If you or someone you know encounter any version of Fentanyl, please refrain from handling it and call 911 immediately.

If you or someone you know suffers from addiction, please call the Lines for Life substance abuse helpline at 1-800-923-4357 or visit www.linesforlife.org. Phone support is available 24 hours a day, seven days a week. You can also text “Recovery Now” to 839863 between 8 am and 11 pm Pacific Time.