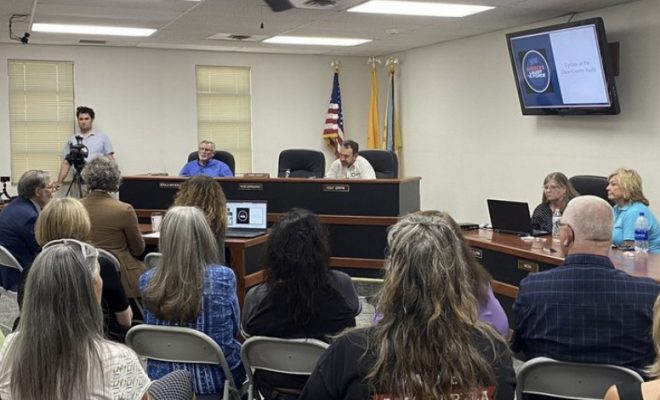 Dominion Voting Machines Were Able to Create and Fill Out Own Ballots?

Things are heating up as the New Mexico election investigation is hitting full steam. New discoveries are being made daily regarding the circumstances that lead to what happened during the 2020 election. This isn’t purely to litigate the 2020 election. Voting integrity regulators are looking to ensure the same things aren’t able to happen in November.

According to a new report from The Gateway Pundit,  they claim a documented feature within Dominion voting machines has caught the attention of investigators.

TRENDING: Top Ivy League-Trained MD Exposes the Link Between… SEX and CANCER in Men over 60

This past week auditors in New Mexico identified that the voting systems used in the counties under review have the ability to fill in ballots.  This was noted in the presentation before officials in Otero County, New Mexico.  We then learned earlier today that a prior New York state investigation identified malicious code that could do this.

Officials in New Mexico have already been made aware of this discovery.

Machines with this alleged functionality to create and fill out their own ballots were apparently present in many states that irregularities occurred. Pairing that with what we have gathered from Dinesh D’Souza‘s documentary “2,000 Mules” it is easy to see what kind of potentially catastrophic consequences this may have caused if exploited.

As mentioned, this alleged ability to create and fill out a ballot autonomously is built into many Dominion voting machines. This is based on what appears to be a manual for those machines. Gateway was able to reference the exact documentation in the manuals.

What You Need to Know: Lack of Sex Causes Cancer?

We’ve pulled screenshots of these passages for your convenience here:

You can imagine how a feature like this could be exploited by bad actors. At best it’s poor design to have something like this internally programmed into these machines. At worst, it speaks of something more troubling for our democratic process.

Here is what this manual says about what this feature can do:

4. Alternatively, if allowed by your jurisdiction, use the Automated Test Deck application. This application, available from Dominion Voting, can automatically generate the appropriate test decks and expected results totals.

The manual provided by Gateway says that this feature requires authorization from election officials to come online.

Automated Test Deck Creation – The creation of automated, comprehensive test decks is an optional service provided by Dominion to assist customers in conducting Logic & Accuracy testing. Using the Election Day database, a series of pre-marked ballots are generated based on a computer algorithm designed to provide the highest assurance of system accuracy. When scanned these decks create known outcomes that can be compared with tabulated results. The elimination of error due to mistakes in hand-marking provides a higher degree of
confidence in test results.”

It is interesting that according to documents circulating online that Georgia was one of the states that opted to activate this Test Deck feature. Here is a screen grab:

While this is not definitive proof that this directly contributed to what happened during the 2020 elections, it does confirm American voters’ conclusion that machines as vulnerable as these should have never been used. The stakes were too great to utilize technology that had so many glaring gaps.

Hopefully as these investigations intensify, there will be pressure to close potential vulnerabilities like these so they don’t happen again in November. That is, if election officials are truly intent on vote integrity. Time will tell.