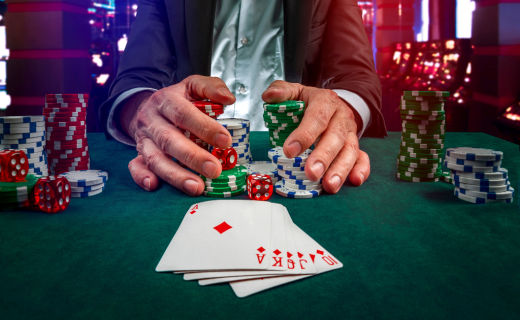 Bust Of Illegal Gambling Operation Leads To 5 Arrests; Here’s Who Was Behind It All

Federal authorities busted an illegal gambling operation which led to five individuals being arrested and charged, all of whom are believed to have ties to the notorious Lucchese crime family dating back at least 15 years. As the old saying goes, every dog has his day. What’s done in the dark will eventually be dragged out into the light, exposed for all to see. Either here, in this life, or the one to come.

According to Fox News, the U.S. Department of Justice announced the bust on Wednesday in a press release. An indictment that was unsealed in a Brooklyn federal court reveals that four of the defendants were taken into custody at their residences in New York, while the fifth was arrested in West Palm Beach, Florida. The DOJ alleged that one individual that was arrested for the gambling operation, 57-year-old Anthony Villani, is a “Lucchese crime family soldier.”

It’s hard to believe that mob families are still a thing these days. You’d think with all of the technology available and our society being more and more under surveillance — which is a violation of privacy in my opinion — it would be very difficult for these kinds of people to exist. Apparently not.

“As alleged, this conduct demonstrates how members of La Cosa Nostra continue to engage in illegal gambling operations and money laundering money-marking schemes that lead to threats of violence against anyone who stands in their way and has resulted in millions of dollars in profits to the Lucchese crime family,” United States Attorney Breon Peace went on to say. “These charges illustrate this Office’s continued commitment to rooting La Cosa Nostra out of New York.”

La Costa Nostra also made a reference to an organized crime syndicate that is made up of several “families” who are known for having associations with the Sicilian mafia, says CBS News.

James Coumoutsos, 59; Dennis Filizzola, 58; Michael Praino, 44; and Louis Tucci, Jr., 59, are the other four defendants in the scheme.

Records obtained from the gambling business’s website indicated that Villani’s illegal gambling operation regularly took bets from between 400 and 1,300 bettors each week, most of whom were based in New York City and the metropolitan area. It was hosted online using offshore servers in Costa Rica and employed local bookmakers to pay and collect winnings in cash, the Justice Department said.

Villani’s bookmakers allegedly regularly included members and associates of the Lucchese crime family and other La Cosa Nostra families. As part of the scheme, Villani employed co-conspirators Tucci, Jr. and Filizzola, as runners to assist in operating the business.

It’s alleged that Villani received more than a million dollars yearly from the gambling business. That’s a fairly healthy chunk of change, wouldn’t you agree? During searches conducted by law enforcement that were related to this matter from December 2020, agents recovered $407,000 in cash from one of Villani’s residences, along with some brass knuckles and various gambling ledgers.

Because what kind of gambling thug doesn’t have a pair of brass knuckles handy? You never know when you might need to bust a few skulls in order to get the money some schmuck owes you, right? Yeesh.

These kinds of operations have no doubt been thriving since 2020, thanks in large part to the assistance they’ve received from the “defund the police” crowd. Ever since George Floyd died in Minneapolis at the hands of local cops, this movement has been demanding that police be given less money, which has resulted in less police presence on the streets.