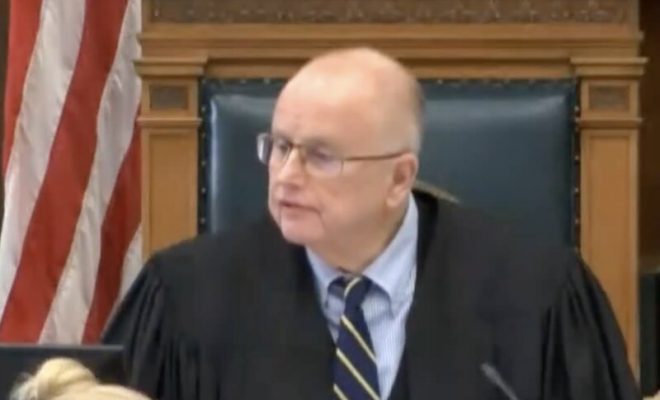 Moments ago, the Judge in the Kyle Rittenhouse case banned MSNBC and NBC News from the courtroom after an alleged producer followed the jury bus last evening.

“Last evening, a person who identified himself as James J. Morrison and who claimed that he was a producer with NBC news, employed with MSNBC and under the supervision of someone named Irene Byon in NY for MSNBC,” the Judge began.

“He stated that he had been instructed by Byon to follow the jury bus. The matter is under further investigation at this point. Thats the latest I have. He was ticketed for violating a traffic control signal. He’s not here today. I have instructed that nobody from MNSBC news will be permitted in this building for the duration of this trial. This is a very serious matter and I don’t know what the climate truth of it is, but it would go without much thinking that someone who is following a jury bus, that is a very extremely serious matter,” the Judge concluded.

TRENDING: NEW 8-Pound Solar Generator is HERE! You’ll Never Run Out of Juice With It.

This is still a developing story. Stay tuned for more…

Related Items
USA First Reporting
← Previous Story Joe Biden Bizarrely Strokes Little Boy’s Body and Face During Bill Signing: “Meet me after this, I can show you around the White House” [VIDEO]
Next Story → THANKS BIDEN: 37% of Truckers Would Quit if the Vaxx Mandate Goes into Effect