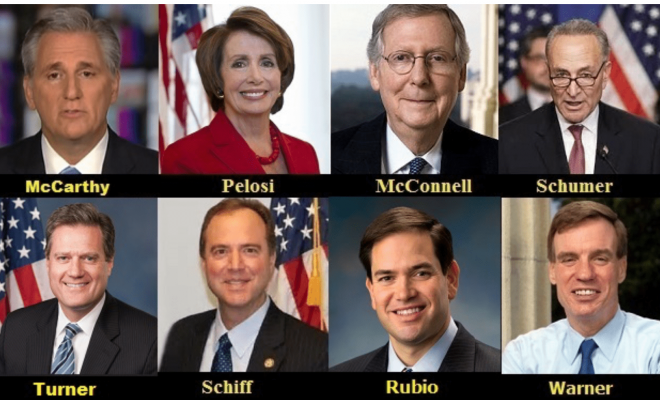 Breaking: “Gang Of Eight” Requests Access To Records Taken During FBI Raid Of Mar-A-Lago…Are They Worried About What Evidence The Documents Contain?

The Senate Select Committee on Intelligence, also known as “the gang of 8,” has requested a copy of the FBI affidavit and has asked the Biden administration for access to the documents taken from President Donald Trump’s home in Florida.

The group can access the most sensitive intelligence information and would like to see what documents Trump kept in his residence.

According to the Conservative Treehouse their motive for getting involved is simple, “If Donald Trump has evidence of the corruption in the Trump-Russia collusion fabrication and targeting effort, there would be evidence of the Senate Select Committee on Intelligence (SSCI) participating in joint-effort with the DOJ and FBI. When the FBI launched their 2016 targeting operation against candidate Donald Trump, it was the SSCI who coordinated with them.”

They went on to say, “When the FBI came under scrutiny (ex. FISA warrant), the corrupt actors within the DOJ and FBI collaborated *ONLY* with the Senate Select Committee on Intelligence (SSCI). The same DOJ and FBI stonewalled the House Permanent Select Committee on Intelligence (HPSCI) which was then led by Chairman Devin Nunes.” Devin Nunes has since moved into the private sector, working as CEO for Truth Social.

The SSCI, Vice-Chair Mark Warner, was given a copy of the Carter Page FISA application at the same time the DOJ and FBI were blocking the House intelligence committee and Chairman Nunes from seeing it.

The leaked FISA was the justification needed to appoint a special counsel to investigate President Trump.

The “gang of eight” is likely eager to see what records Trump kept and if those records contain information pertaining to them and their roles during the Russia Hoax.

What You Need to Know. Doctor #1 Rule for Gum Bleeding: Never Use Your Mouthwash Like This

Americans are increasingly distrustful of government agencies such as the FBI and are growing more concerned about congressional leaders. Trump may choose to expose more information on what his documents reveal. Trump kept his campaign promises and continues to drain the swamp so people understand the level of corruption that has seeped into the entire US government.
Trump would also like his documents that are now being requested by the gang of eight, calling on the FBI to return the documents taken during the raid, “I want them back.”