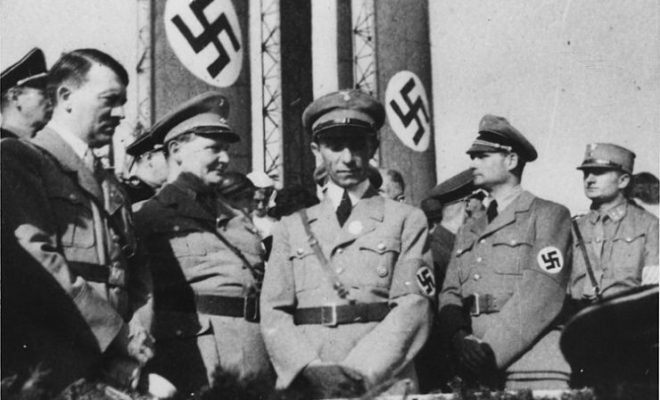 In 1931, Hitler’s Brownshirts were infamous for operating outside of the law. They used intimidation and violence to force compliance of Jewish citizens in Germany.

Today, Joe Biden’s America is starting to feel an awful lot like Hitler’s Germany, and Trump supporters are starting to understand what it means to be targeted and punished for being part of a group that must be purged and destroyed.

Joe Biden appears to be finishing the work started by his boss, Barack Obama, in 2008, when the Saul Alinsky disciple set out to divide America:

Alinsky RULE 8: “Keep the pressure on. Never let up.” Keep trying new things to keep the opposition off balance. As the opposition masters one approach, hit them from the flank with something new.

This afternoon, it was revealed that the residences of 35 Trump supporters were raided by Joe Biden’s FBI yesterday. Of course, the FBI couldn’t be bothered to investigate Joe Biden’s crackhead son’s laptop before the election that contained evidence that should have landed both Joe and Hunter in prison, but they can be bothered to raid the homes of 35 Trump supporters in an effort to intimidate Trump loyalists like Boris Epshteyn (who is Jewish) was allegedly part of the sweeping raid.

“There were 35 FBI raids yesterday. There were 35 senior members of MAGA, supporters of Donald Trump, that the FBI rolled in on when they didn’t have to do it. The jackbooted gestapo got to show up at their door and make a big display of this.”

Watch Steve Bannon explain the details of the raids to Charlie Kirk on his WarRoom show, where he calls them the “Gestapo” and revealed that the FBI didn’t go to the lawyers of the individual’s homes they raided. The only name Bannon, who is also part of the Brownshirt roundup by Biden and fellow Democrat thugs, was Boris Epshteyn. We will continue to update this story as more names become available.

Trump ally and top lawyer Harmeet Dillon confirmed the raids on the homes of “many Trump allies” she knows  in a tweet:

Last month, Donald J. Trump, his family, his staff, and his lawyers got a first-hand look at what it must’ve felt like to be an enemy of the state in Germany during Hitler’s reign of terror.

In 1931, membership in the Brownshirts swelled to 2 million within only 2 years – twenty times as large as the number of troops and officers in the regular German Army.

The vast increase in membership was aided by unemployed men joining up due to the effects of the Great Depression. The Depression had caused American banks to call in all of their foreign loans (which had helped fund German industry) at very short notice, leading to a significant rise in unemployment. This encouraged people to turn to extreme political parties such as the Nazis, who appeared to offer simple solutions to their problems.

The parallels today to Nazi Germany are stunning.

You don’t even have to look that far…Joe Biden’s speech last week, where he railed against Trump supporters, calling them “a threat to democracy” and “extremists,” was enough for most Americans to understand that we, as a nation, are in for some very rough waters with divisive and hate-filled leadership at all levels of government and extending to our universities.

Here is a short excerpt from his vile speech:

And now, America must choose to move forward or to move backwards. To build a future or be obsessed about the past. To be a nation of hope and unity and optimism or a nation of fear, division, and of darkness.

MAGA Republicans have made their choice. They embrace anger, they thrive on chaos. They live not in the light of truth,  but in the shadow of lies. But together, we can choose a different path.